Home » About Us » Blog » Playing Chess in Cuba
share

World record for the most people playing chess simultaneously? Check. Fidel Castro vs. Bobby Fischer? Check. Home of the “Human Chess Machine” and one of the greatest players of all time? Check. Che Guevara once said “Naturally, chess is a hobby, but it is also a teacher of reason, and the countries that have good chess teams also lead the world in other more important spheres”. According to chess.com, Cuba is currently ranked 20th in the world. About a decade ago, the training of chess professors with a university degree began, and there are around one thousand of them in Cuba today. Take a look at this friendly game:

In 2004, approximately 13,000 chess players congregated in Santa Clara for the largest mass chess games in history. In the crowd was Anatoly Karpov, whom chess fans know as a former grandmaster and world champion. Also in attendance - Elian Gonzalez. Here’s a link to video footage from Reuters of Karpov in action during a visit to Cuba:

In 2002, Fidel was part of the crowd that set the former world record with over 11,000 attendees, but his most discussed chess match took place well before then. In 1966, he played with the legendary Bobby Fischer. According to some sources Castro won, and although Fidel does possess solid skills, I’m willing to bet he wasn’t that skilled. More likely is the account that Fidel was involved in a separate match and Fischer stopped by to provide a few pointers when this photograph was taken. 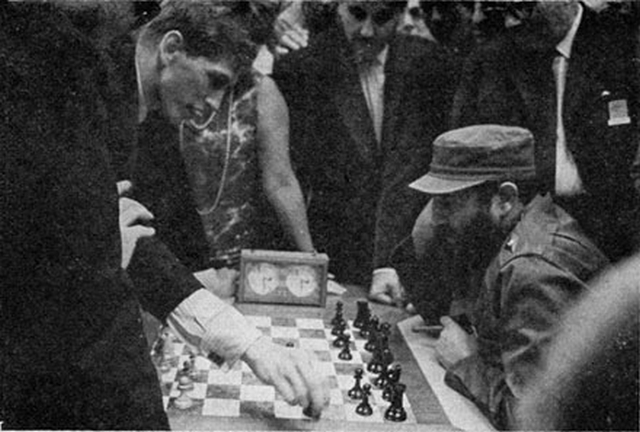 Cuba’s own legendary chess player was the incredible Jose Raoul Capablanca. As the story has it, he learned to play at the age of four by pointing out an illegal move his father had just made - and proceeded to defeat his dad twice for good measure. Capablanca is credited with having some of the most impressive rapid chess skills and ferocious endgames ever, and he reigned as a dominant world champion from 1921-1927.   In fact, the history of chess in Cuba actually dates all the way back to the time of Columbus in the 16th century. Soon, American travelers to Cuba will be able to trade pawns with locals when visiting Santiago de Cuba at Parque Céspedes, or pull up to a makeshift table during a weekly party in Bayamo and play the night away. Here’s a taste of the Bayamo nightly chess (or checkers if you prefer something easier) scene:

If you’re a fan of this great game like me or perhaps interested in insightCuba helping you design a custom group to play in Cuba in the future, a word of advice before you travel there. Learn how to say checkmate in Spanish.