Home » About Us » Blog » Where have All the 50's Cadillacs Gone?
share 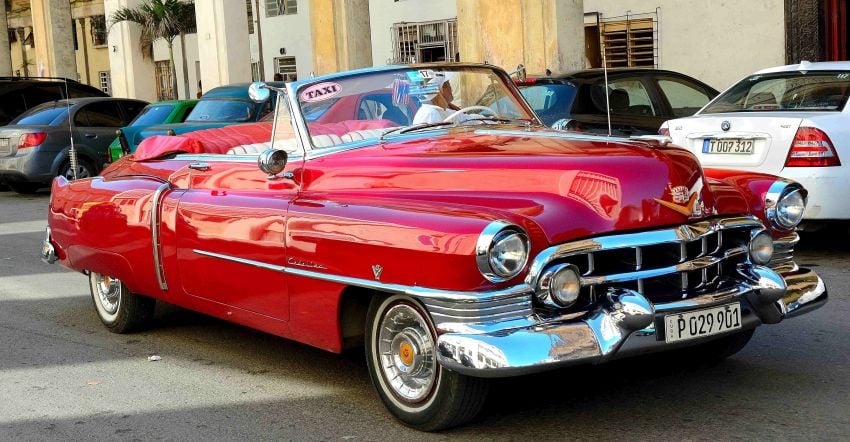 Cadillac word origin - From the name of the French explorer Antoine de La Mothe Cadillac (1658–1730), who founded the city of Detroit, where the cars are manufactured­.

I go to car classic shows regularly, as I have a love affair with those massive 1950’s driving machines of my youth. Although I see many 50’s Chevrolets and Fords at shows, the 50’s Cadillac is a rare bird. I have a soft spot in my heart for the “Caddy,” as my dad owned a beautiful 1958 Sapphire blue two-tone Sedan de Ville, and I learned to drive in this immense luxury automobile. Before the gas crisis of 1973 foreign cars were almost non-existent on the roads of America. There was certainly no shortage of strikingly stylish Detroit iron in driveways across the nation, but the Cadillac was THE car. It was the most expensive vehicle available, and the statement of choice of the wealthy, have-more’s, wanna-be’s, politicos, gangsters, assorted other “big fromages,” and in my dad’s case, successful independent businessmen. Indisputably garish by today’s standards, the 1958 Caddy with its Art Deco detailed design was dripping with chrome from bumper to bumper. Showing off in the booming post-war American economy was considered cool, and a big Caddy in front of a house in suburbia meant you had “arrived."

At 19 feet long and almost seven feet wide, dad’s de Ville just barely fit into our one car garage. It tipped the scales with a full complement of gas at 5,200 pounds and was built like a tank. A small miscalculation on my behalf as a young driver once removed our garage door in its entirety, windows included. Newton’s second law of motion states that “force equals mass times acceleration,” and although the car itself emerged with only a scuff on the bumper, this incident was a demonstration of physics that dad did not appreciate. Fuel efficiency? Forget it. Its enormous V8 engine had a four-barrel carburetor large enough to run a track meet around. It drank gas to the tune of 10 miles per gallon around town. Turn on the AC and that dropped to 8. Uphill mileage was laughable. Nobody cared. America was riding high on the prosperous post-war economy, and if you could afford this ride, ponying up for gas was a non-issue.

So, where are all those beautiful 50’s Cadillacs now? I was up until the wee hours last night and my research indicates that exactly 1,217,032 Cadillacs rolled off the assembly line in Motor City between 1950 and 1959. That’s more than a million of the finest luxury cars every built on planet earth. The most likely ending for most of these American icons is that of the junkyard where they were crushed and melted down and returned to life as utility shelving, screen doors, tools boxes and the like, or, more recent vintage cars. Perhaps some achieved reincarnation as part of new Cadillacs. I am only speculating and am open to what you might know.

The good news is that many Cadillacs that rolled off the production line in the 1950's made their home in Cuba. I have seen and ridden in many of these beauties ranging in condition from belching smoke and barely held together by wire and glue, to absolutely pristine. In the 1950s, Cuba was the world’s leading importer of Cadillacs. When Castro assumed power in 1959, he enacted legislation that made the import of automobiles illegal without government authorization, which was rarely granted. This sealed Cuba off from any sort of automotive future, and left over 150,000 Detroit built autos, not all Cadillacs of course, on the island.  Today Cuba is a classic American car “living” museum. Of these 150,000 classics, most are still on the road operating as taxis, family transportation, or for the restored vehicles, allow visitors like myself the opportunity to go back in time and enjoy these once heralded classics.

The US Embargo Against Cuba in the early 1960's completely shut off the parts supply chain to Cuba. The subsequent Soviet Union collapse in 1991, and Cuba's ensuing 'special period' brought the cessation of all raw materials entering the country almost overnight. There was no longer availability of steel, aluminum, rubber, paint, plastic, fabric, glass, wire, screws, bolts, tools, or much else. With U.S. parts being difficult to acquire, keeping these cars running is a complex process, yet it is being accomplished on a monumental scale in Cuba.

The Cuban mechanic is a genius and a highly respected well-paid professional. He is an inventor, innovator, artist, and master of ingenuity. He knows how to fix a leaky radiator using guava and banana pieces. A discarded coat hanger can be used as wire, carburetor linkage, or a clamp. He repairs rusted bodies using wire fencing and a special mix of chemicals and fillers. He fabricates his own brake pads. He interfaces components from disparate vehicles. He salvages parts from discarded freight trains knowing each can be repurposed. He is an absolute master of cut and paste. He finds a use for everything and discards nothing. A peek under the hood of almost any of these classic cars reveals a gumbo of disparate pieces, somehow miraculously working.

On each of my trips to this unique island my wife and I hire out a Cadillac and driver for the unique experience and sheer pleasure of riding in a piece of American history. There is pure magic in riding in a Cadillac over 60 years after its birth. What will your car look like in 60 years? The year and model I choose varies from trip to trip but every ride in a 1950's Cadillac is a one of a kind unforgettable experience. If it is a convertible the feeling of riding along Havana's iconic Malecon sea wall is off the hook!

My wife with our driver and his beautiful 1955 Eldorado convertible

Being a lover of both Cuba and 1950’s Cadillacs, I could write about this wonderful marriage forever, but I’ll end here, and leave you with a gallery of the many fine Caddies of Cuba. As you can see, some are in better condition than others, but in my world each one is its own masterpiece and a classic. I have ridden is some of these, and just photographed others. I can’t wait to return to Cuba again in 2019 for more rides in the ultimate Detroit luxury time machine.

A 1957 convertible in mint condition – Stylish or garish?

Ready to check out the Cadillacs of Cuba? We recommend a Weekend in Havana. Or take a look at all our Cuba tour offerings here.

Written By: Howard Axelrod
Images By: Howard Axlerod
Howard Axelrod is an Ashland, Massachusetts resident, travel photographer, writer, and former high technology executive. He has photographed in 82 countries on six continents and has travelled to 40 of the U.S. states. He is primarily interested in native and tribal cultures, architecture, and wildlife which he feels are all disappearing at an alarming rate. His goal is to document through photographs and writing as much of this as possible, while it still exists. He can be reached at highwind@verizon.net
*The views and opinion expressed in this article are those of the authors and do not necessarily reflect the position of insightCuba.
share
« Previous Post
Next Post »