Home » About Us » Blog » EXPLORE CAMAGÜEY BY BICI-TAXI
share 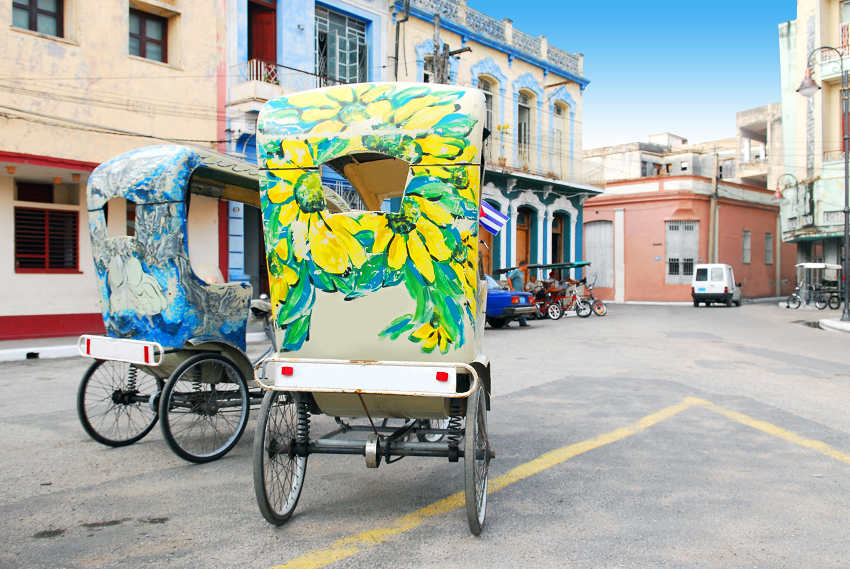 Explore Cuba’s third-largest city, with its culture of clay pots and history of pirate raids, from the back of a bicycle-drawn carriage.

The 780-mile long island of Cuba is traversed in many ways – bus, car, horseback, tractor, buggy, bicycle, and anything faster than foot. In Camagüey, a UNESCO World Heritage Site, you’ll take a bici-taxi past the town’s many people, parks and plazas.

These privately-owned taxis are a source of pride among those who drive them. And the carriages are often personalized with radios, photos, and decorations.

Enroute, you’ll notice the city’s many blind alleys and forked streets that lead to plazas of differing size. The city was burned in 1668 by Henry Morgan (of Captain Morgan fame). Legend says the streets were intentionally rebuilt like a maze to thwart future attackers.

While exploring Camagüey by bicitaxi, take notice of the plentiful tinajones.

From the back of a bicitaxi, Camagüey seems like a city on the move. And in its earliest years, it did nothing but move – relocating twice between 1514 and 1528. Among the first villas established by conquistador Diego Velázquez, Camagüey (originally Santa María del Puerto Príncipe) held a coveted position on Cuba’s northern coast. But poor growing conditions, pirate attacks, and rebellions by exploited indigenous groups led the Spaniards inland to another native settlement, named for the sacred camagua tree – Camagüey.

The city grew quickly through the 1600s, sustained by cattle and sugar. But despite moving nearly 40 miles away from shore, pirate attacks remained an ongoing issue. Centuries later, Camagüey-born Ignacio Agramonte became a central figure in the Cuban independence movement when he raised a cavalry regiment and helped draft the country’s first constitution.

Today, with a population of over 300,000, Camagüey is Cuba’s third-largest city – a hub of culture and industry. And as a Catholic stronghold, churches rival tinajones as the city’s dominant architectural feature.

Camagüey’s maze-like streets lead every which way, which means the city’s top activity is having no idea where you’re going. This isn’t all bad, of course, as the alleyways lead to surprising art scapes, shopping centers, and church steeples. But some must-sees include Plaza del Carmen, Ignacio Agramonte Park, and the city’s historic center near Plaza de Los Trabajadores.

Finding the best of these attractions can make wandering well worth your time. But, insightCuba experts are always ready to point you in the right direction.