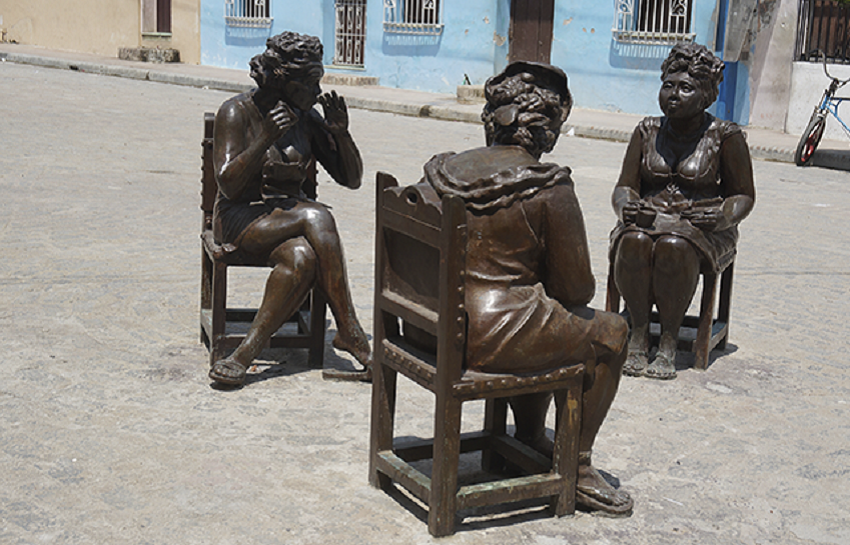 This plaza, in ruins not long ago, has been restored to its original glory – visited by many for its authentic Cuban feeling.

The cobblestone space of Plaza Del Carmen in Camaguey is a tribute to the best of Cuban culture. Giant clay pots or tinajónes, stand alongside colonial-style street lamps, and iconic life-sized sculptures. These pieces by artist Martha Jimenez depict the city’s residents, Camagüeyanos, reading newspapers, and gossiping.

Jimenez’s studio workshop is just off the plaza. We’ll stop by to see her latest creations.

Many doors open onto Camagüey’s Plaza del Carmen, but when Martha Petrona Jiménez Pérez steps outside, she has the privilege of seeing her pieces both inside and out. Her sculptures are city landmarks and true to form for the septuagenarian clay and bronze worker. Born in 1948, Jiménez was among the first graduates from the National Art Schools – one of Cuba’s most prestigious educational institutions.

Jiménez is among the best in contemporary Cuban art. She’s received the prestigious Distinction for National Culture Award, among others, and has multiple works displayed, including many across Camagüey, Europe, and North America.

About the Church of Our Lady of Carmen

The plaza’s other defining feature is the Iglesia de Nuestra Señora del Carmen. While its baroque-style is commonplace across the city, its twin-tower steeples are one-of-a-kind in Camagüey. Dating back to 1825, this church was a sanctuary one century later when a major, category five hurricane slammed into the providence, killing over 3,000 Cubans. Today, it holds the offices of the city historian.

This church, like the plaza, has been fully restored – and a visit to colorful Camagüey should leave you feeling refreshed as well.

This experience is available on our Undiscovered Cuba Tour or can be integrated into a custom-made itinerary.