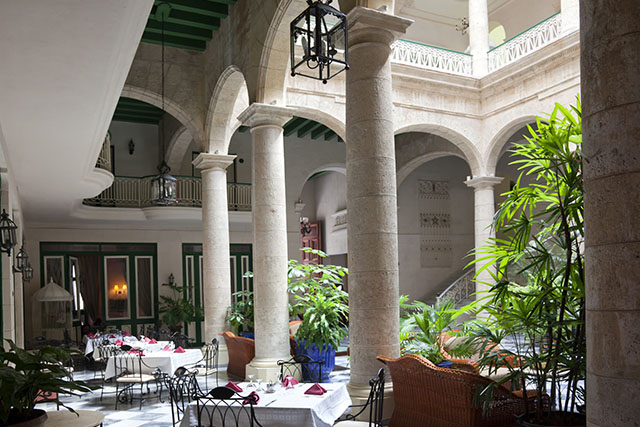 Hotel Florida is renowned for it Colonial charm, architectural beauty and central location in the heart of Havana Vieja. With only 25 rooms, it’s not surprising that the structure was originally a private residence, built in 1836 and occupied over time by aristocrats and wealthy businessmen. Later the mansion served many uses—a British club, the first Hotel Florida (for roughly 30 years), the Bank of Commercial Development, law offices and other purposes—before it was renovated and re-opened in 1999 as the current-day Hotel Florida.

The elegant building sits on the corner of Calles Cuba and Obispo, a vibrant pedestrian street filled with shops and activity, and is within walking distance of Plaza des Armas, Plaza Vieja,, Museum of the Revolution, the Capitol, Malecón, Paseo Prado and Central Park. For those who wish to explore Havana’s history and culture, the hotel’s location is ideal. 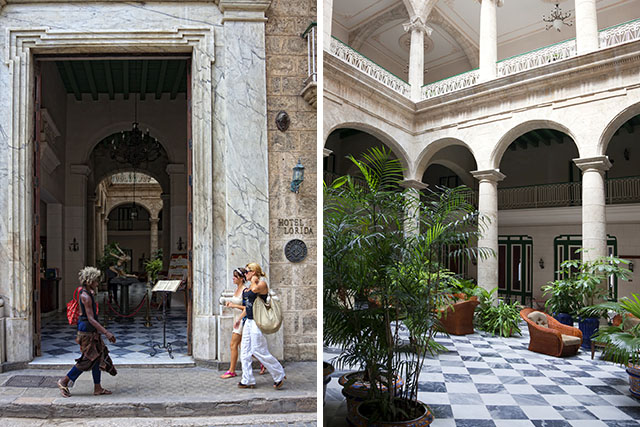 The entrance from the bustling Calle Obispo into Hotel Florida is through an impressive restored wooden door that stretches over 13 feet. A finely carved art deco sculpture of a dancing nude woman greets visitors within, and simple high-ceilinged guest rooms (with Italian marble and some with tall French doors that open onto balconies) balance the opulence of the common areas.

Visitors can relax and in the Spanish-style inner green and white marble courtyard—complete with a sliding glass roof to ward off inclement weather, arches, stone columns, wrought-iron lanterns and inner balconies above—which offers a refreshingly cool oasis from the hubbub of Calle Obispo outside. In the hotel’s piano bar, Maragato (whose name is a tribute to one of the most famous barmen of Cuba in the early 20th century), Cuban music or jazz is usually performed nightly. This lively bar is a great place to go dancing (mostly salsa). The hotel’s lobby bar is also famous for international cocktails and house concoctions.

A special feature of the Hotel Florida begins in a corridor that connects to the adjacent Hotel Marques de Prado Ameno. This shortcut feels like a quick journey back in time because Hotel Marques de Prado Ameno, also once a private residence constructed for nobility, was built more than a century earlier. Hotel Florida itself, however, is also a portal that connects visitors directly to many gems within this magical city.