Home » About Us » Blog » Famous and Notable Cubans
share 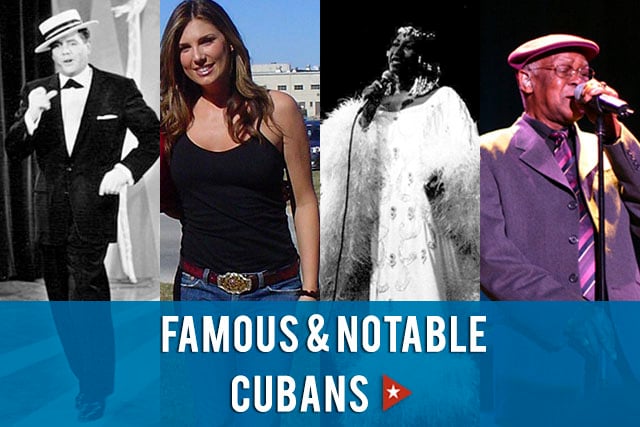 Cuba’s a small island, but it’s given the world many athletes, artists, actors, musicians, and other notables.

Known far and wide as orchestra leader Ricky Ricardo on I Love Lucy, Santiago-born Desiderio Alberto Arnaz y de Acha III was no second banana. As a television producer, Desi Arnaz showed legendary business and creative acumen. After I Love Lucy, he went on to shape many popular programs, including Star Trek and The Untouchables. The accomplished musician was largely credited with having introduced the Cuban conga line to the U.S.

Model, TV hostess, and performer Daisy Fuentes hails from Havana, but grew up in New Jersey. She learned English, she says, watching I Love Lucy reruns. Fuentes broke barriers as MTV’s first Latina VJ and Revlon’s first Latina spokesperson signed to a worldwide contract. She went on to host House of Style and her own talk show. Fuentes has hosted, cohosted, or appeared on numerous other programs, and established clothing, hair care, and eyewear lines.

Having powered the Mets to their recent World Series appearance—the team's first since 2000—Granma-born Yoenis Cespedes, nicknamed La Potencia, has played for the Oakland As, Boston Red Sox, and other major league teams. Today, he is one of the most sought-after free agents in the game.

Born in Havana in 1925, Úrsula Hilaria Celia de la Caridad Cruz Alfonso, better known as Celia Cruz, was a force to be reckoned with. With 23 gold albums, she became a salsa singing sensation, and one of the most successful Latin music artists of all time. It’s said that her father wanted her to become a teacher, but she heard that entertainers earned much more.

Ibrahim Ferrer—who, according to legend, was born at a dance—worked at shining shoes as well as making music. He began his musical career at age 12, when he was orphaned and began singing for money on the streets of his native San Luis. In his early teens, he and a cousin formed a singing act and performed at local events. When Ferrer was in his ‘70s, American musician Ry Cooder brought him international renown when he recorded Ferrer’s first solo album and produced The Buena Vista Social Club album, which led to the eponymous documentary film. At 72, Ferrer won a Latin Grammy in the Best New Artist category.

Diarist and Jazz Age playgirl Anais Nin was born in Cuba, but is more closely associated with France.

Bandleader Xavier Cugat, who helped popularize Latin music in the states, was born in Spain, and would die there, but spent his formative years in Cuba. He performed with the legendary Enrico Caruso, became the Waldorf-Astoria hotel’s highest-paid bandleader, and drew cartoons for the Los Angeles Times. Interestingly, he worked briefly with native Cuban Desi Arnaz—in New York.

Other notable citizens with Cuban connections include artist Jose Fuster, actor and former model William Levy, singers Camilla Cabellla and Rita Marley, and soap actor Peter Bergman. Cuba has produced many major-league baseball players. With the thaw in relations between our nations, the U.S. will undoubtedly see more Cuban culture in time to come.