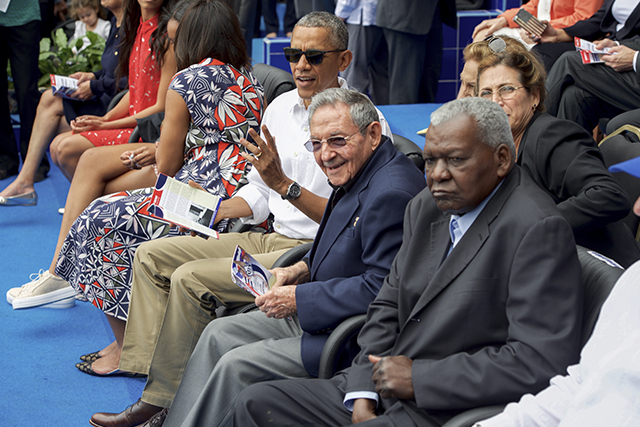 President Obama made history in March when he became the first sitting U.S. President to travel to Cuba in nearly 90 years.

Okay, so you probably already knew that. But President Obama’s three-day trip to Cuba was just the tip of the iceberg of an exciting year of firsts for the Caribbean nation.

Just a few days after Obama made history in Cuba, the Rolling Stones stole the spotlight, drawing over 1 million rockers from across the globe to a Havana arena. Celebs Richard Gere and Naomi Campbell were among those in attendance (just behind Natalie Portman and Helen Hunt on this year’s long list Hollywood visitors).

Even Pope Francis came back for an encore. He made history in Cuba not once, but twice! A lesser-known interesting fact about Cuba -- after Francis’s first Cuba tour in September, the pontiff returned to Havana in February for no lesser task than bridging a 1,000-year rift between the Catholic and Russian Orthodox Churches.

On the political front, Cuba and the United States have continued to make progress toward normalizing relations after over half a century of estrangement. In one small example of the rapprochement, U.S. postal service official Carlos Rodriguez handed a symbolic letter to the president of the Cuban postal service in mid-March, marking the reestablishment of direct mail service between the two nations. “We’re making history!” Carlos reportedly exclaimed.

Beyond direct mail service, the Obama administration has further relaxed restrictions on trade with Cuba this year, allowing access to credit and U.S. dollars, as well as making it easier to travel to Cuba from the U.S on people-to people trips. The U.S. Department of Agriculture plans to open an office in Cuba, and Cuban and U.S. officials have also reached landmark maritime and aviation agreements.

U.S. businesses have since struck historic deals of their own on the island. Starwood Hotels & Resorts became the first U.S. hotel company to sign a deal with Cuba since the era when the Habana Libre was still the Habana Hilton. Google has jumped on board to create greater Internet access in Cuba. And new business delegations from all over the world are arriving in Cuba every week.

As Cuba attracts new visitors, and businesses, from around the world, 2016 has also been a record year for Cubans making their mark abroad. While Cuban President Raul Castro added a French stamp to his passport, local Cuban music talents got their very own showcase at the South by Southwest music festival in Austin, Texas, this year. The list goes on.

President Obama’s visit was clearly not the first time history was made in Cuba this year, and it certainly will not be the last.

On May 3rd, models sporting the Chanel cruise 2017 collection descended upon the historic Paseo del Prado and Plaza de la Catedral (Cathedral Square) in Old Havana. The cast of the eighth installment of the Fast and the Furious will soon be cruising down Havana’s Malecon seaside drive at 90 miles an hour. And, rumor has it, the likes of Marc Anthony and Ozzy Osbourne are among the musicians considering serenading the Cuban people this year.