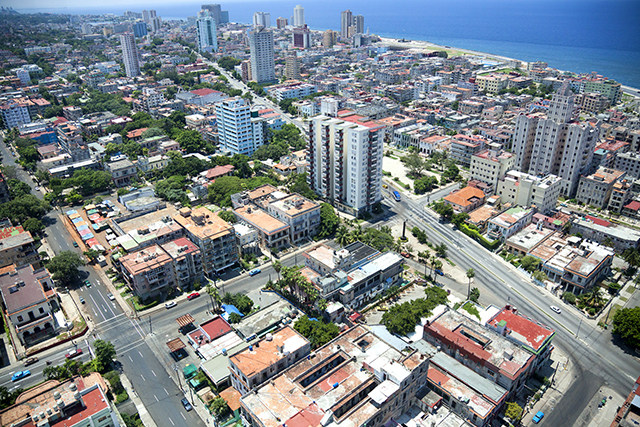 Tucked between the art deco Cuban architecture masterpieces and wide, leafy avenues of Havana’s Vedado neighborhood, Los Naranjos restaurant is one spot where Cuba’s splendorous past and innovative future meet.

Alexis Naranjo, a slender Havana native with a warm smile and face that belies his age, converted the front end of his family’s 1930’s villa into the restaurant last year. Alexis knew he wanted to start a small business ever since the Cuban government began opening opportunities for entrepreneurs in the 1990s. Today, homegrown ventures such as his are driving Cuba’s future forward as the Cold War era melts away. Roughly half a million Cubans now have self-employment licenses in an otherwise entirely state-run economy.

Alexis pinched pennies for ten years as a hotel clerk in Spain to help his family restore their home’s Corinthian columns, high ceilings, and ample antiques to their former glory. He was inspired to finally take the jump and open the restaurant when Cuba’s President Raul Castro and President Obama both announced on December 17, 2014 that the United States and Cuba would reestablish diplomatic relations after more than half a century.  For the restaurant, Alexis said he wanted to “recreate the splendorous past that the island had, before the Americans shut the doors,” referring to the U.S. embargo barring trade and travel to Cuba that took effect shortly after Cuba’s 1959 revolution. Despite the recent warming of ties between the U.S. and Cuban governments, the embargo on Cuba still remains in effect. However, Americans are allowed to travel to Cuba to conduct government-sanctioned activities, such as educational “people-to-people” tours. The historic announcement in December piqued the interest of Americans in travel to Cuba, and Alexis, like most Cubans, is extremely excited to welcome Americans back into his home.

While Alexis sees the importance of preserving the beauty and intrigue that Cuba’s past offers, he is also looking to the future. He, like many Cubans, has a flair for the flashy, and he made sure to add a few modern accouterments to his historic home turned fine dining establishment. His former childhood bedroom has been transformed into a full bar, enclosed by six stacked flat-screen TVs projecting breathtaking photos—an idea he picked up on trip to London.

Los Naranjos brings this same fusion of historic Cuba and modern Cuba to the kitchen. Due to trade restrictions stemming from the U.S. embargo, as well as Cuba’s own economic troubles, food and other resources are often scarce. It is not uncommon for restaurants to stick to a standard menu comprised of three easily accessible options: pork, chicken, and fish (in order of their popularity among Cubans). Los Naranjos kicks the traditional menu up a notch with its selection of carpaccio, lobster, shrimp, and lamb plates. Los Naranjos also boasts a plentiful salad selection, which can sometimes be a bit hard to come by in Cuba. Despite an impressive urban agriculture movement that makes salad fixings relatively easy for chefs to find, Cubans tend to skimp on the greens in favor of pork, beans, and rice – culinary staples with their roots in Cuba’s Spanish and African heritage. Los Naranjos offers several dishes with a more modern European influence that must have stuck with Alexis from his Madrid days. A few options include Serrano ham, no less than five risottos, and even more pasta variations.

Despite the varied and quite international menu, Los Naranjos always takes it back to Cuba’s basics. Featured dishes rotate daily but always come accompanied by generous helpings of traditional Cuban rice, beans, and fried root vegetables. The house favorite for dessert is a delicious locally grown guava and cheese concoction that has been popular in Cuba for over a century.

After a deeply satisfying meal, guests can head out to the remarkable airy balcony for a cigar and mojito (or two), or wander through the French doors down the gallery to peruse the antiques collection. Be careful, though, because if you wander too far down to the back of the house you might just catch one of the Naranjo family members in their pajamas!