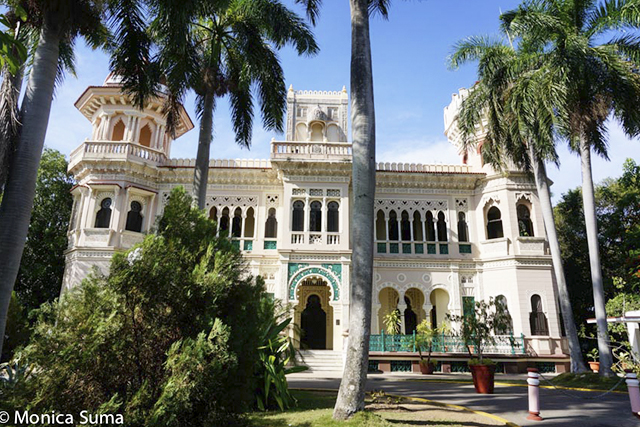 Founded in 1819 by French settlers from Bordeaux and Louisiana on the coast of South-central Cuba, Cienfuegos (literal translation “one hundred fires”) is the only Cuban city with an entirely distinct character and urban layout. A port city dubbed as the Pearl of the South thanks to its exceptional location hugging Cienfuegos Bay, its unique architectural ensemble of neoclassical structures earned its distinction as a UNESCO World Heritage site in 2005.

And judging from the wealth of remarkable buildings, it’s a well-deserved attribution. There are several public posters scattered across the city, listing the most noteworthy buildings and their location.

However, despite singing its praises as la ciudad que más me gusta a mí (the city I like best) - famed singer Benny Moré once said of his home city - Cienfuegos is not instantly seductive as Old Havana or Trinidad. But rather, setting an example in modern urbanism due to its wider streets and original grid plan composed of 25 blocks.

Most important for visitors lies within Pueblo Nuevo, including Paseo del Prado and Parque Martí, and Punta Gorda, a peninsula protruding into the bay where eclectic early 20th-century palaces can be admired, as well as a slew of not-to-be missed 1950s wooden houses overlooking the sea. Nearby, Palacio del Valle, operating today as a restaurant and cultural events space, is Cienfuegos’ most representative architectural highlight, a brilliant mansion combining Spanish-Moorish elements with Gothic, Baroque and Romanesque styles. 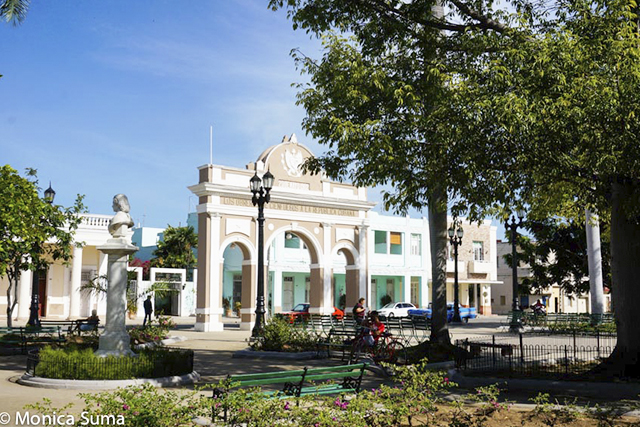 Besides a number of streets reflecting its French origins in their names, the French influence can be best distinguished in Parque Jose Martí, formerly known as Plaza de Armas, where an eye-catching Arc de Triomphe graces the square. Home to monuments aplenty, including the grand Teatro Tomás Terry, and an opulence of buildings from the 19th and 20th century of important patrimonial value, there’s no surprise as to why the city center holds the National Monument distinction. 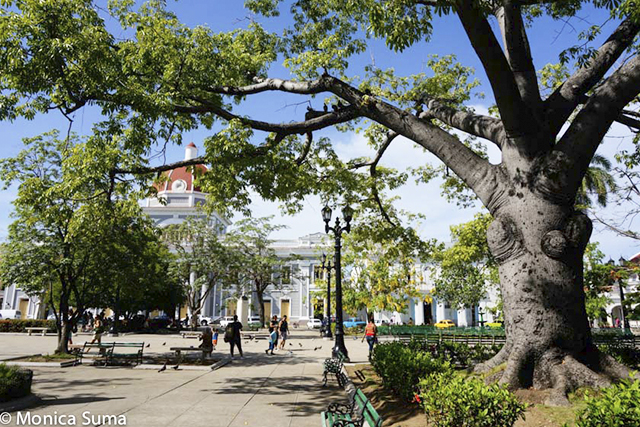 Legend has it that the Kapok tree situated in park’s epicenter, referred to by the French as fromager (the box for Camembert cheese), is a sacred tree for the Maya. Due to its lumps, which look as if the tree had eyes, the Ceiba tree continues to stand solid and hold a special significance for locals.

Direct your eyes on the western side of the park, where Casa de la Cultura Benjamin Duarte merits a visit. For a nominal 1-2 CUC fee, you can head upstairs to this former Palacio Ferrer, yet another neoclassical masterpiece whose ballroom-like interior yields visions of a lavish past. Take the wrought-iron staircase up the rooftop cupola for unique photo ops and the best views of the city. 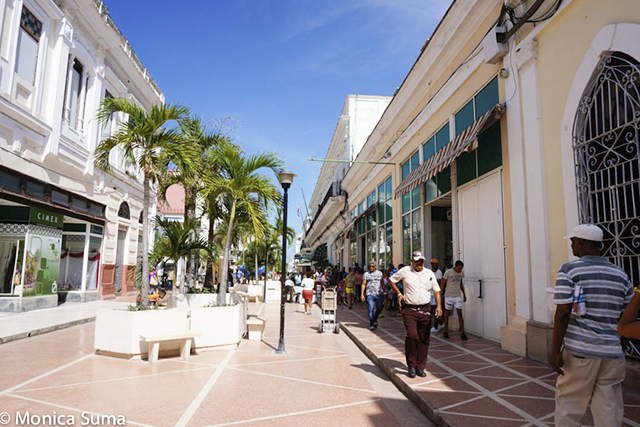 Further on, Parque Jose Martí leads into an extensive pedestrian street, Cienfuegos Boulevard, laden with shops and businesses of all kinds.  Continuing on the hustle and bustle of this commercial thoroughfare, the main artery of the city comes into the horizon, Paseo del Prado. This is the longest street lined with trees in Cuba, which leads to the Cienfuegarian Malecón.

Not the (Havana) Malecón, seen on postcards and posters worldwide, but one you need to know. This is where your day should end, a meeting place for all Cienfuegarianos as the sunsets, complete with music, beers and that unbeatable chatty Cuban spirit.