Home » About Us » Blog » Havana: Off the Beaten Path
share 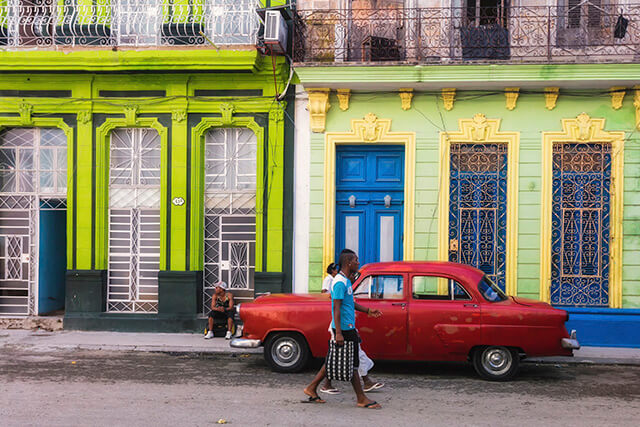 There’s no shortage of things to do and see in Havana, from Hotel Nacional and the Malecón to the Plaza de la Revolución, the city is a bustling time capsule filled with sites every tourist will see. But if you’re the kind of person who likes to explore the road less traveled and dive into the local scene we’ve got a few insider spots for you:

In west Havana, in the Jaimanitas neighborhood, artist José Fuster has decorated over 80 public places and houses with his murals, sculptures, paintings and other works. His studio and home is a good place to begin your explorations, but you’ll easily find his signature spread throughout the neighborhood in unique displays of public art.

Fuster graduated from the Escuela Nacional de Instructores de Arte in 1965, and began his career in the Cubanacán Ceramics Workshop. In 1995, he began festooning his own house (in which he’s lived since 1975), and little by little—and with permission from his neighbors—the project had spread beyond his home. You’ll find his passionate work is influenced by nature and surrealists, such as Picasso and Brancusi. The theme, if any one could be drawn, is joy. For an immersive experience, visit Casa-Estudio José Fuster.

Opened in 2014, this little gem is located in a little alley, directly behind the capital. With an interesting hipster vibe and a decor they call an “homage to the art travel and music of Havana”—which translates to a collection of old photos, artifacts, new art, license plates and a balcony covered in neckties—the restaurant offers tasty food and drinks (including, of course, rum). With just one bartender, bring your patience with you on a busy night.

The Plaza de Armas alone is worth a visit because it’s Havana’s oldest square, dating back to the late 1700s, along with many of the buildings that surround it. But in addition to the historic square, you’ll find vendors nearby with unusual wares at the daily flea market—especially if you appreciate graphic production and historical artifacts. Poke around to discover the vendors who sell vintage pins, rare books, records, writings of Fidel and posters. The market itself proves to be an interesting museum of Cuba’s political and cultural history.

Some of the most interesting aspects of Havana are hidden in plain sight, such as this old theater on one of Havana’s big commercial streets. Opened it 1941, the theater is part of a large complex in an 11-story building that houses businesses on the ground floor, 64 apartments and another theater. Although a little rundown, all of the original Art Deco details remain, including the furniture and a classic zodiac tile floor in the main lobby.

This dimly lit café is a great spot to hear some of Havana’s best jazz, day or night. With graffiti-covered walls, the décor strikes a charming balance between refined and decaying. El Patchanka serves a simple tapas menu and is the perfect place for an informal afternoon or night of dancing and drinks.

Visit Havana Vieja on all of our Cuba Tours.