One of the most sought-after percussionists live and in-studio, Carol Steele has worked with Peter Gabriel, Steve Winwood, Joan Baez, Tears for Fears, Bette Midler, and other towering figures in music. But it’s her love for Cuba that has shaped her career.

“After years of collecting and listening to many Cuban albums and copying and studying everything I could get my hands on, it was my dream to visit Cuba,” she says.  “I especially wanted to go to Matanzas, and see Los Muñequitos de Matanzas” in 1987. “Not only did I accomplish that,” she says, “but they made me sit down and play with them!”

Carol became the first American woman to make music with the iconic folkloric group. (She also enjoyed the honor of playing and singing, on tour in the United States, with Lazaro Ros, and Amelia Pedroso, two of Cuba’s best-known and most-loved Afro-Cuban singers.) Since that first life-changing experience, she has traveled to Cuba consistently and led groups there for 16 years.

Carol’s enthusiasm is contagious, as is her love of Cuba’s music, culture, and people. She has traveled to many parts of the island, and maintains lasting relationships throughout.

After many years of study, Carol was initiated into the Regal de Ocha (or Santeria, as most people know it). She loves to share her knowledge about the history of the religion, music, and art as a form of prayer..

Carol says, “If you come to the Cuban people sincerely, with your heart in your hands, they will meet you in that place, and be your true friends forever!  I laid mine at their feet, and 27 years later, that's my family,” 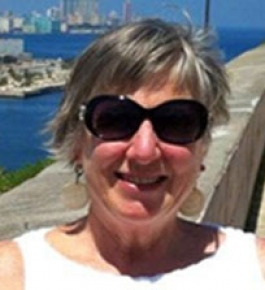