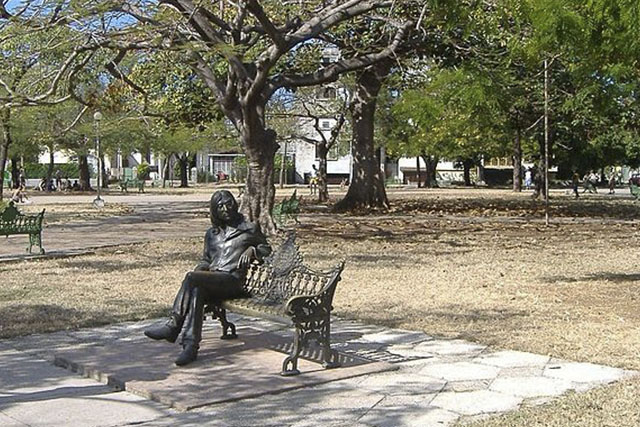 Fifty years ago, Beatles music, considered a decadent symbol of capitalism, was banned in Cuba. But much has changed.

In 2000, a statue honoring the memory of Beatles cofounder John Lennon was installed amid great ceremony in Vedado, Havana, as Parque Menocal became Parque John Lennon. Calling Lennon a fellow revolutionary, then-President Fidel Castro unveiled the bronze model of the musician seated on a park bench.  At the statue’s feet, an inscription reads in Spanish, “You may say I’m a dreamer, but I’m not the only one,” a translation from Lennon’s most famous solo song, “Imagine.”

Because the figure’s iconic glasses come off, they have been stolen many times. Now, a volunteer, nonagenarian retiree Juan Gonzalez, holds the specs until visitors ask him to place them on the statue for photos.  Lennon’s likeness, as he looked in the late 1960s, seems to study passersby intently.

Created by Cuban artist José Villa Soberón, the sculpture was unveiled 20 years after Lennon was shot to death outside his New York City home by a stranger posing as a fan.

Lennon had crusaded against war, racism, and other forms of injustice and hypocrisy.  His music and activities earned him enemies in the U.S. as well as Cuba. The FBI and INS kept tabs on him, and he was threatened with deportation. Meanwhile, at the height of the band’s fame, island Beatles fans secretly passed around copies of the group’s recordings. (Even the president of the Cuban Institute of Radio and Television, responsible for enforcing the ban, later admitted he liked Beatles music.) In fact, Cuba’s connection to the Beatles runs so deep, an anthology, The Beatles in Cuba, chronicles the band’s various connections to the Caribbean country. Havana hosted annual Beatles conferences, more academic than commercial, from the late 1990s to early 2000s. As recently as 2011, a Beatle-themed nightclub, Yellow Submarine, opened in Havana, playing Fab Four music long into the night. Imagine.