Camagüey, the largest province in Cuba, is also one of its richest. Home to a large community of artists and a World Heritage Site, the seemingly endless maze of winding streets comprising the colonial Historical Center, draped throughout with pops of color and its emblematic tinajones  – large jars made out of clay, once collecting rainwater – is the perfect destination for the culturally hungry. Visit Camagüey on our Undiscovered Cuba tour.

It’s in the capital of the province, Cuba’s third largest bearing the same name of Camagüey, where you will truly appreciate the colonial atmosphere of the city. Starting from the UNESCO declared Historical Center, awarded since 2008, its European urban layout and architectural influences unravel as laid down throughout the ages: neoclassical, eclectic, Art Deco, Neo-colonial as well as some Art Nouveau and rationalism. Continuing on its topsy-turvy streets, passing by colorful plazas and artist sites, Casino Campestre stands as Cuba’s biggest urban park, occupying 32 acres over Hatibonico River.

Boasting the sole church in town with two towers, Notre Dame de Carmen, the Plaza del Carmen is delightfully adorned by a set of life-size characters, also made out of clay, depicting Cuban scenes of every day life. 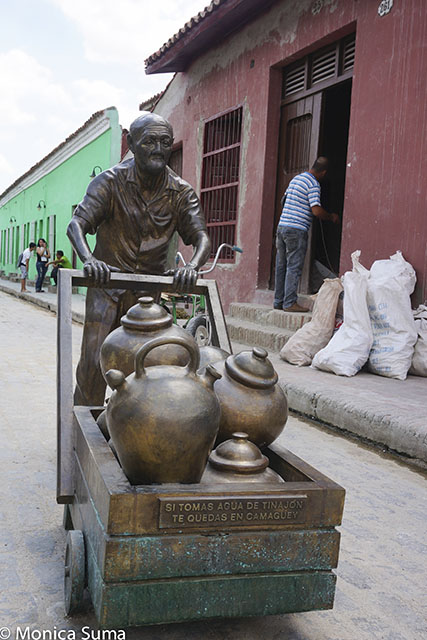 If you drink water from the tinajon, you remain in Camagüey. 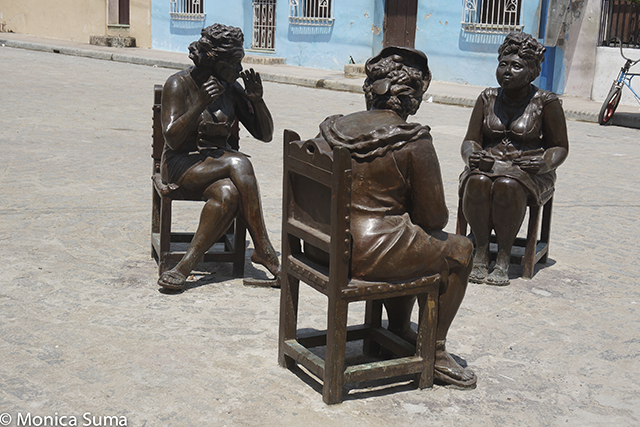 Right by the square, inside the Studio-Gallery Martha Jimenez, colorful, vibrant art is hanging from every direction. Home to many of the artists of Camagüey, the gallery, a psychedelic space of creative expression also doubles as home to artists Joel Jover and his wife Ileana Sánchez. Known as two of Cuba’s most celebrated contemporary artists, they each thrive within the frames of entirely different visions: Ileana’s exuberant, colorful Cuban motifs versus Joel’s darker, more severe themes. Married for over three decades, they joint forces in collecting antiques for over 20 years. Theirs was a vintage treasure palace, covered entirely in one-off gems: art, vintage signs, ceramic plates and what not.

Equally so, not to miss in the art spectrum of Camaguey is the local UNEAC, The National Union of Writers and Artists of Cuba, which hosts recurring exhibits, free events, and more - a great source for the community.

But art aside, the oldest square in Camagüey, Plaza San Juan de Dios, captivates most. A cobblestone unaltered paradise dating from the 18th century, with bright green doors and tempting verandas, it’s at Restaurant 1800, a paladar, where an authentic ropa vieja awaits, alfresco, complete with rum, plaza views and Cuban chants of lost love.

When it comes to entertainment, the options are many. Regular home to the Ballet of Camagüey, the second largest classical ballet company on the island nation, Teatro Principal hosts a variety of artists renowned in dance, music and theatre, the main stage for the highest performing arts. Furthermore, in the same neighborhood, a variety of cinemas stand-by to pull you in with best offerings from the Cuban cinema.

Unnoticed by passerby, except for its stunning restored cobalt blue façade, is the House of Cultural Diversity of Camagüey, an edifice equally stunning inside and out. An institution promoting education on the roots of the Cuban society and fostering cultural exchange, the sumptuous building dating back from the twentieth century opened its doors in 2010, following extensive renovations.

In close proximity, Casa de la Trova should not be missed if you’re on the hunt for live traditional Cuban music. If you’re lucky – I was – you might run into Cuba’s last remaining salsa legend, still entertaining the crowds, despite being a centenary. But that’s an entirely other story …