Home » About Us » Blog » The Perfect Cuban Sandwich
share 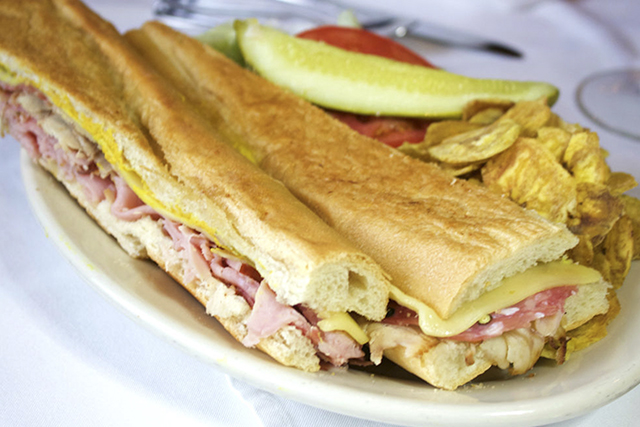 The “Cubano” likely originated with Cuban factory workers in Tampa and Key West at the turn of the century. Given the ease of back-and-forth travel then between Florida and Cuba, the sandwich soon became a lunchtime favorite in both places. A later version, made from sweeter bread, caught on as a “medianoche” (midnight snack) at late-night clubs.

Around the turn of the century, Florida factories saw an influx of Italian immigrants, who added salami to their sandwiches. Whether the ingredient belongs in Cubanos remains a point of disagreement between modern and traditional chefs. It’s usually seen on Cuban sandwiches in Tampa, where it made its first appearance. Other ingredients may vary, as well. American Cubanos often contain lettuce, tomatoes, mayonnaise, or aioli. Not so in Cuba or among traditionalists.

“Layering all of the ingredients evenly and in the correct order” is the key to creating the ideal Cuban sandwich, says Andrea Gonzmart Williams, fifth-generation co-owner of Tampa, Florida’s Columbia Restaurant. “From the bottom to the top: ham, roast pork, salami, Swiss cheese, pickle chips and yellow mustard on the top half of the bread.”

To make the perfect Cuban hoagie at home, Williams stresses high-quality ingredients. “Your sandwich is only as good as what you put into it—and what [kind of bread] you put it on!”

Long, hero-like Cuban bread is essential to the Cubano.  Traditionally, the loaves contained lard, though few American versions now do. Other breads, such as soft Italian, may be used if Cuban bread is unavailable.

A sandwich press gives the treat its trademark texture. Often, the outer sides of the bread are coated lightly with olive oil before the sandwich is pressed.

“If you don’t have a press at home (and most of us don’t),” Williams says,  “a little trick I like to use is to place an iron skillet in the oven, preheated to 400 degrees, wrap the sandwich in foil, and then place it underneath the skillet and bake for eight-to-ten minutes. That makes it hot and crispy.” Make sure to remove the skillet from the oven with care.

“The Cuban sandwich is so much more than just a sandwich,” Williams adds. “It represents all of those people who settled in Ybor City [Tampa] in the early 1900s. The ham is symbolic of the Spaniards, the pork of the Cubans, the salami represents the Italians, and the mustard, Swiss cheese, and pickles represent the Germans. Not only is it yummy, it also tells a story.”