Home » About Us » Blog » The Five Best Views of Havana
share 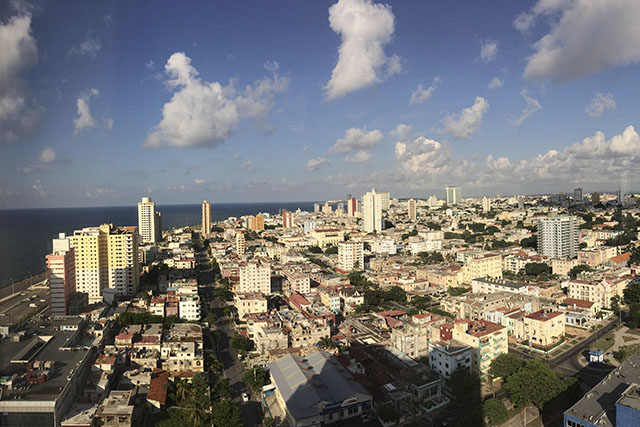 Cuba, the pearl of the Antilles, is perhaps most renowned for its music, rum, and cigars. Equally deserving, though, are its unique cityscapes. Havana, Cuba’s capital, is known as the Paris of the Caribbean. The city is steeped in history and boasts the best of Cuban architecture, including remnants of the colonial period, classical European-style edifices, art deco homes, 1950’s mobster-run casinos, and giant concrete Soviet structures. Notably absent are the towering, shining skyscrapers that characterize other Latin American metropolises like Mexico City and Panama City. This architecturally diverse city is built around the historic Havana Bay and is hugged by a five-mile sea wall that the two million Habaneros (someone from Havana) use as something like a communal living room. Every which way you turn, Havana is truly a feast for the senses.

Here are five of the best spots to catch a great view of the city:

A camera obscura built in 2001 sits atop a building that dates back to 1909 in Old Havana’s historic Plaza Vieja, giving visitors a live 360-degree image of Havana reflected in a giant satellite-like dish. The entrance fee is only $2, and there is rarely much of wait at the top. A guide will operate the optical device, pointing out landmarks and moving pedestrians and cars on the street below in whichever language the viewers’ request. When they’re done in the darkroom, guests can step outside to the roof terrace to get a few great photos of their own.

The Cristo de la Habana, or Christ of Havana, is a 65-foot statue situated on a hilltop across the Havana Bay from downtown in a small neighborhood called Casablanca. While the statue’s size pales in comparison to its lookalike in Rio de Janeiro, the view from its perch is spectacular. Looking down, one can watch ships roll in through the mouth of Havana Bay and pick out several neighborhoods across the water below, including Old Havana and the entire stretch of the five-mile sea wall on the city’s northern border. Almost as exciting as the view is the journey to the top of the hill where the statue sits. Travelers can either drive through an underwater tunnel to reach the other side of the bay, or those seeking the authentic Cuban experience can take a short ride on the local commuter ferry for $0.05.

The Magic Flute provides a particularly good view for Americans – it overlooks the U.S. embassy in Havana. The Magic Flute is a restaurant and bar located in the penthouse of an apartment building. Most travelers in the area have come to gaze at the embassy, so you’d never know the Magic Flute was there unless you were in on the secret. With excellent cocktails, the embassy and ocean as a backdrop, and even a roof terrace pool, this is one of the best spots in Havana to catch a sunset. The world-class musicians who perform Cuban music there most nights are the cherry on top.

La Guarida (“the hideout” in Spanish) is one of Cuba’s most famous restaurants. The house it is located in was the set for one of Cuba’s most beloved films, Fresa y Chocolate (“Strawberry and Chocolate”). The owners converted it into a restaurant in the 1990s. La Guarida features some of the best cuisine on the island and frequent celebrity visits. There’s not much of a view from the restaurant itself, but the owners just opened a roomy, classy bar on the roof. From here, patrons can sip daiquiris while enjoying the view of the surrounding Central Havana neighborhood, nearby Old Havana, and the never-ending sea view to the North.

The Melia Cohiba hotel is an InsightCuba favorite, and many of our guests stay there during their Cuba tour. One of the best parts of the hotel is its location in the heart of the vibrant Vedado neighbhorhood, as close to the seafront as you can get. Whether your room is facing inland, overlooking the sea of early 20th century mansions below, or north toward the coast, you’re in for a fantastic view – one that you can enjoy in your bathrobe.