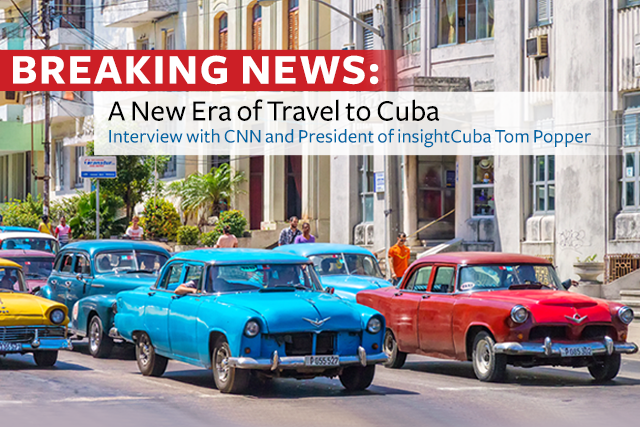 Anyone who has been paying attention to headlines has gathered that travel to Cuba for Americans is getting easier. On August 31st, the first commercial flight since 1961 between the United States and Cuba landed in the Cuban town of Santa Clara, making history. JetBlue operated the flight, making it the first of half a dozen major carriers to kick off regularly scheduled service between the United States and Cuba.

Ever since the U.S. and Cuban governments announced in December 2014 that they would become friends again, record numbers of tourists from the United States and all over the world have been pouring into Cuba, in a rush to see it before it changes – or as some say, before McDonald’s moves in.

The U.S. embargo of Cuba remains in place, and it is still illegal for Americans to visit Cuba for purely touristic purposes. However, there are twelve categories of legal travel to Cuba for Americans, including family visits, religious activities, and educational activities.

By now it’s not so much a question of whether Americans can or should go, but rather when and how. Unfortunately, traveling to Cuba on your own still isn’t as easy as it looks. It’s not as simple as hopping on one of the new flights.

As CNN noted in its article about the direct flights, “Cuba’s largely state-run tourism industry is already buckling under the increased demand.” Watch the full video below.

Cuba’s tourism industry hasn’t quite caught up with the boom in visitors, specifically in terms of accommodations. There simply aren’t enough quality hotels to meet the need at this time.

As Tom Popper, the president of insightCuba told CNN:

"The hotels are full… The infrastructure wasn’t ready for the avalanche of interest, whether it’s American travelers, Chinese travelers, Canadian travelers. Cuba is building up its infrastructure. They have plans over the next four or five years to add many additional hotels, so we just advise people to plan ahead."

The same goes for restaurants. Amid Cuba’s boom in tourism, it has become quite difficult to get a spot at the table for a good meal. Tour companies book reservations for their groups well in advance, and also have the added advantage of having longstanding relationships with restaurant owners.

Aside from being guaranteed satisfactory food and lodging during their trip to Cuba, there are several other key reasons why Americans should travel to Cuba with a tour company.

Quite simply, Cuba can be a really confusing place, for Cubans and foreigners alike! For example, Cuba is one of the few countries in the world that has two national currencies. The Cuban Peso and the Convertible Peso circulate simultaneously, but one is worth 24 times more than the other. To make matters more complicated, price tags in Cuba rarely indicate which currency to use.

So how do you know which currency to use? What can you do if you run out of money, or get pickpocketed? How can you call home? Can you drink the water? Where can you access the Internet in Cuba? Where do you go if you get sick? What do you do if your flight is delayed or canceled? Navigating these types of situations as smoothly as possible requires insider knowledge. Guests that travel to Cuba with a tour company get 24/7 access to tour guides who can answer all these questions, and more.

Cuba is primarily a cash-only society. While technically some credit cards and ATMs work for Americans in Cuba, they are realistically not reliable. Travelers must bring enough cash to pay for every aspect of their trip, including hotels, meals, transportation, tips, etc. For guests on an InsightCuba tour, however, these costs are already included in the trip, so passengers only need to carry enough cash for souvenirs and other optional expenses.

Even for the most savvy travelers, going to Cuba with a tour company is the best way to take the headache out of travel to Cuba, and to make sure that dealing with tricky situations doesn’t detract from your trip.

Because pure tourism in Cuba isn’t permitted for Americans, travel companies like insightCuba offer educational “people-to-people” trips that prioritize contact with Cubans and immerse guests in everyday Cuban life. Going on an organized tour of Cuba can actually help guests get a more authentic look at life in Cuba and steer clear of tourist traps.

Those who are used to traveling on their own will be happy to know that insightCuba has an average group size of 16 and never exceeds 24.

Going on an organized tour of Cuba gives Americans the best of both worlds -- they get to have an authentic Cuban experience while sparing themselves the headache.