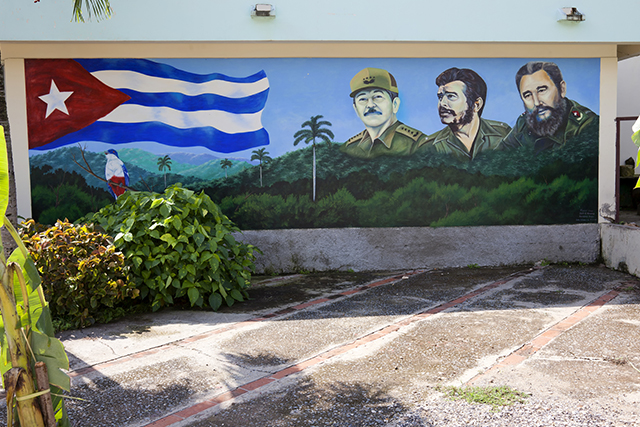 The face of Ernesto “Che” Guevara, born in northern Argentina in 1928 and killed in Bolivia in 1967, is plastered on government buildings and billboards across Cuba. Tourist markets are awash with Che t-shirts, paintings, and replicas of the Argentine’s token beret with the single star across the front. A giant Che likeness, depicting his shoulder-length hair under the famous beret, overlooks Cuba’s iconic Revolution Square in Havana from the side of the Interior Ministry building. The irony was not lost on many when Pope Francis, the first Argentine Pope, celebrated mass in the Square under the gaze of Che, a diehard atheist, during the pontiff’s groundbreaking trip to Cuba last year.

After noticing all the Che memorabilia, people who travel to Cuba might ponder, “So where are all the statues of Fidel and Raul Castro?” One of the most interesting facts about Cuba is why a deceased Argentine is a more prominent icon on the island than the brothers who led Cuba in a revolution and have governed the country for the last half a century.

Che Guevara, despite being a foreigner, is a beloved national Cuban hero. He was instrumental in the 1959 Cuban revolution that overthrew the U.S.-backed Fulgencio Batista government and brought the Castro brothers to power. Fidel Castro, who ceded power to younger brother Raul in 2006, first met Che Guevara in Mexico in 1955. The two future revolutionary heroes strategized the overthrow of Fulgencio Batista, who took control of Cuba in a 1952 coup d’etat. After two years of guerilla warfare, rebel forces took control of Havana, and Batista finally fled the country on New Years Day, 1959. Che Guevara served as the president of the National Bank of Cuba before leaving the island just a few years later to participate in other revolutionary efforts in Africa and South America. In 1967, Che was captured and killed in Bolivia.

Next to the giant Che face in Revolution Square is another fallen guerilla, Camilo Cienfuegos, on the Ministry of Communications building. Cienfuegos, who shares a name with a large province and its small colonial capital in southern Cuba, was reportedly very close to Che Guevara. Cienfuegos was one of 82 guerrilla fighters who boarded the famous Granma yacht in Mexico that landed on the shores of eastern Cuba in 1956, kicking off the armed struggle that would eventually lead to the downfall of Batista and the victory of the Cuban revolution. After Batista fled, Camilo Cienfuegos served briefly as a high-level army commander before dying in a plane crash later that year.

There is one Cuban hero whose face might just be even more ubiquitous on the island than the beloved Che. Though not a guerilla warrior, Jose Marti is considered one of the founding fathers of the Cuban revolution, roughly equivalent to the United States’ Washington, Jefferson, or Lincoln. Jose Marti was a prominent figure in Cuba’s struggle for independence against Spain in the latter half of the 19th century. A writer and poet, his texts and ideology were part of the foundation of the Cuban revolution and are still taught extensively in Cuba’s schools today.

Fidel and Raul Castro are arguably the most important figures in Cuba’s modern history, but when the first sculpture of Fidel was erected by famous Italian artist Enzo Gallo Chiapardi just after the rebel forces claimed victory, Fidel immediately ordered it to be taken down. Cuba’s Communist Party enacted laws shortly after the 1959 revolution prohibiting the commemoration of living persons by way of monuments, street names, and the like. Fidel has explained in interviews that this was a countermeasure against the creation of a cult of personality, which he said would be detrimental to the goals of the revolution.

So, save the occasional patriotic inspirational poster with Fidel or Raul’s portrait hanging in state offices, Castro brothers memorabilia will remain few and far between in Cuba while they are still living. It’s probably safe to assume, however, that after their passing, more than a few statues will be erected and streets will be renamed in honor of the Castro brothers.