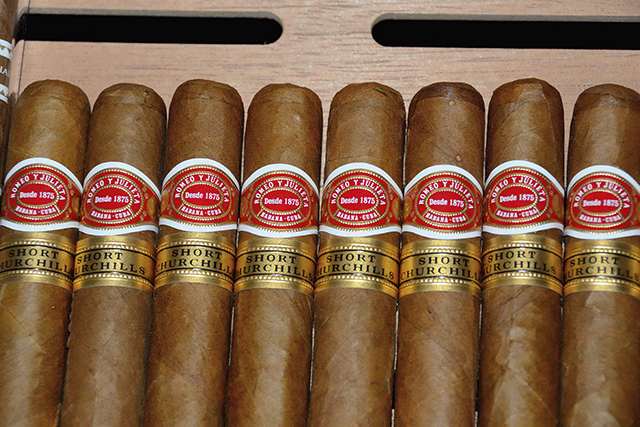 Sigmund Freud, the founding Father of psychoanalysis was famous for interpreting symbols and human habits. He found meaning is almost everything. In photographs, he is often seen smoking a cigar. Once asked “What is the meaning of the cigar Sigmund?”, he replied that “Sometimes a cigar is just a cigar”.

Well friends, I have just returned from Cuba and am here to tell you that in Cuba, a cigar is NOT “just a cigar”. “Tabaco” is the ultimate Cuban export, and is renowned across the globe for its rich flavor and superior quality. 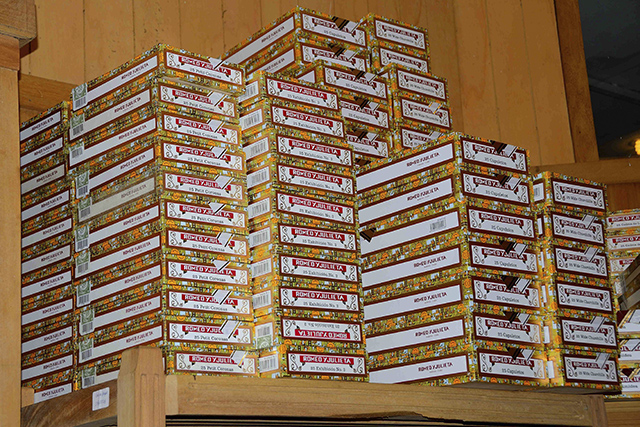 On the western end of the island, the climate, rich soil, and knowledge of the growers, create a combination that produces the world’s finest tobacco. These skilled farmers do an extraordinary job of cultivating this crop. Years of applied wisdom and patience are required to create a leaf that can be used to craft an expensive Habano cigar. Cuba’s cigars are coveted across the globe, and agreed by most experts to be the world’s finest. I myself am not a cigar smoker, but the mention of a Cuban Cohiba, Partaga, Montecristo, or Romeo and Juliet to a cigar enthusiast, will cause their pulse to quicken.

President John F. Kennedy ordered an aide to buy him Cuban cigars before he enacted the U.S. trade embargo making them illegal. On February 6, 1962 Kennedy asked his press secretary and fellow cigar lover Pierre Salinger to obtain “1,000 Petit Upmanns”, so he could have them in hand before they were to become contraband. Upon being notified the following day that 1,200 of Cuba's finest were in hand, Kennedy signed the pronouncement to ban all of Cuba’s products from the US. Because of this trade embargo, the import of these delicacies has been illegal in America for more than six decades. They are available throughout the rest of the world, but bringing them into the US by any means is strictly forbidden by law, and could get you a stiff fine or some time in the “big house” folding laundry. The US cigar smoker must settle for the high-quality cigars from the Dominican Republic or Nicaragua. These are fine products, but a hand rolled Cuban cigar (according to those in the know), is a masterpiece. 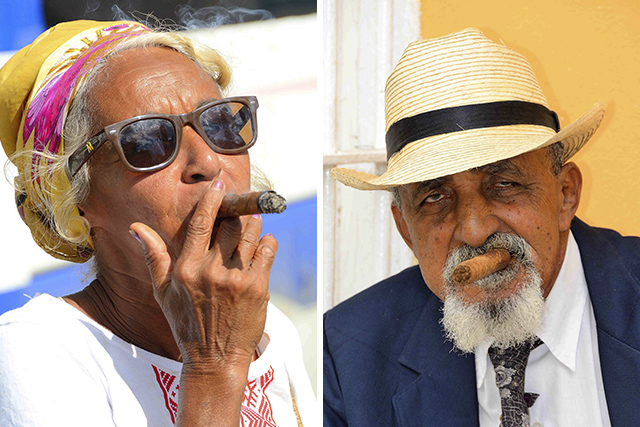 In Cuba both men and women enjoy cigars [Photo by: Howard Axelrod]

When I told my brother-in-law, a man who loves a good cigar, that I was Cuba bound, he asked if I could bring cigars back for him. On my 2015 visit to Cuba I returned with a sampler box as a gift, and now that Jim had tasted the “forbidden fruit”, he wanted more. With relaxed regulations on what Americans can bring back for private use, I said I would gladly. Jim peeled off three crisp $ 100 bills and said to get “as many Churchill sized hand rolled Romeo and Juliet’s as this would buy”.

I am a curious type and have always been amazed by how much excitement the Cuban cigar generates among cigar aficionados, so I decided to investigate the product a bit further. On Jan 24th, we toured the Fabrica de Tabacos de Constantine Perez cigar factory in Santa Clara, Cuba. In Cuba, all cigar factories are state owned, and there is a high level of secrecy and security associated with any visit. Absolutely no cameras, purses or backpacks of any size are allowed inside – no exceptions. We learned that the growing of the tobacco leaf is a complex process and relies as much on the knowledge and skill of the farmer, as the soil and climate. Cigar tobacco has been grown in Cuba for over 500 years, and the “tribal knowledge” is passed from father to son, generation after generation. The “curing” and fermenting” processes are art forms unto themselves, and this 3 to 5-year endeavor is a critical component in the outcome of the finished cigar. 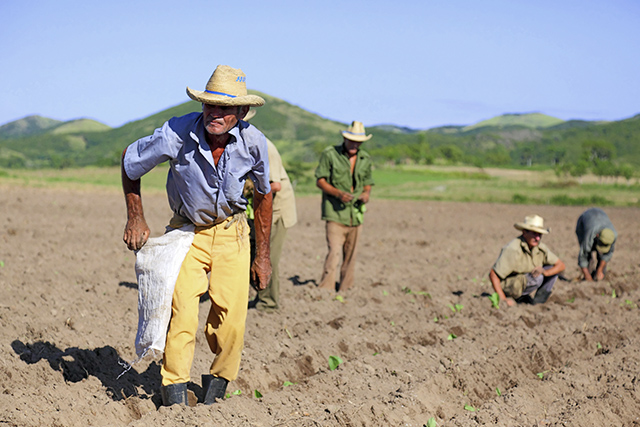 In the factory, we witnessed the intricate process of hand rolling, cutting, and pressing cigars. Depending upon cigar type and size, a skilled worker (67% of which were women), can produce between 70 and 160 finished cigars a day. Each cigar is produced from start to finish by a single worker. Before he or she rolls their first cigar for commercial sale, a 9-month apprenticeship is required, and only 40% of these students graduate. There is more skill involved than you might think. Cubans like things done well, and the Cuban cigar is the ultimate symbol of national pride, along with their Havana Club rum, and world class coffee. All raw materials and the process itself is carefully monitored by men and woman who have been in the business for decades. Throughout the day music is played, or a book is read, and broadcast to all areas of the factory. Cuba is a highly literate and cultured society, and perhaps the final cigar benefits from music and verse. Quality control is taken very seriously. Before being boxed up, each cigar is individually tested for length, thickness, and combustibility (using a machine that pulls air through the cigar). The reject rate is around 5%. An employee whose work is not up to standard is given additional training and fine tuning. Everything in this factory is done by hand. I saw no machinery whatsoever. Although machine rolled cigars are made in Cuba, they are considered a lower quality product. The hand rolled cigar is the only one for those that demand the absolute best Amigo.

After our tour, all my questions having been answered by our guide, I proceeded to the factory store’s walk in humidor to fulfill my brother-in-law’s order. When I gave the salesperson the particulars, she knew exactly what he wanted. Here’s the math folks. The US dollar trades 1 for 1 with the Cuban Convertible Peso (the CUC), but you cannot use US dollars for purchasing anything in Cuba. You must use CUC’s. When dollars are converted to CUC’s the government takes 10%, and the change fee is 3%, resulting in 87 CUC’s per dollar. Jim’s $ 300, became 261 CUC’s. A box of 10 of Churchill sized Romeo and Juliet’s cost 107 CUC’s or if you will, $123 US Dollars. That’s $12.30 per cigar! My Brother-in-laws $ 300 bought only 24 cigars. But Jim’s taste in cigars is simple – He likes the best. 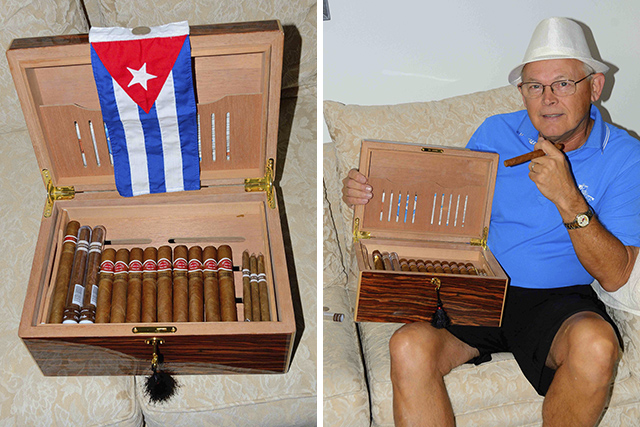 Well reader, this whole business of the $ 12.30 cigar seems a bit crazy to me, but when I told this to my wife, she laughed saying “but a $4.50 cup of coffee (please, it’s a Latte!) at Starbucks does not?” As usual, she is right. But look at the smiles on the faces in photographs of Che, Fidel, Winston Churchill, John Kennedy, George Burns, W.C. Fields, and Groucho Marks, smoking those big cigars. What are they thinking about? Don’t strain your brain on this friends. Clearly these men KNOW that a cigar is NOT “just a cigar”.

Photos and Blog by Howard Axelrod

Howard Axelrod is an Ashland, MA resident, travel photographer and writer, and former high technology executive. He has photographed in 79 countries on six continents. He is primarily interested in native and tribal cultures, history, architecture, religion, and wildlife, all of which he feels are all disappearing at an alarming rate. His goal is to document through photography and writing as much of this as possible, while it still exists.

He can be reached at highwind@verizon