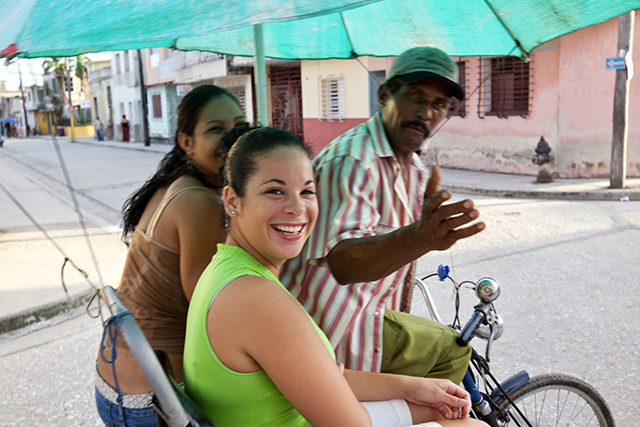 I'm sure you've heard about Cuba's classic cars. But have you heard of the gua-gua or the bicitaxi? Due to the lack of resources on this island nation, Cuban's have come up with more than one creative way to get around. Below four of the most common forms of public transportation in Havana are defined.

I arrive at the shaded shelter of a bus stop on a busy Havana street corner. There is one small concrete bench, and a group of about two dozen habaneros (Havana locals) standing under parasols, squatting along the curb, and leaning against a building. Two kids kick a ball between themselves, and a group of teenagers in school uniforms are huddled listening to music and sharing roasted peanuts out of a white paper tube. I call out, “Último?” meaning, “Who’s last?” An older man with thick, tanned skin raises a tired hand. I quickly memorize his face, his jean pants, and red, tucked-in shirt. Once the bus arrives, my place in line will be after him.

This simple yet ingenuous system for forming “lines” makes the frequent activity of waiting in line in Cuba a more bearable, and entirely non-linear process. In Cuba, it is common practice to spend a lot of time standing in line, whether at the bakery or the theater, for internet cards or for the monthly ration. The system of memorizing the order in which individuals arrive allows everyone the flexibility of the standing where they please. You can wander off to buy a guava pastry from a street seller, sit down to read the newspaper on a curb, or plop down in a shady patch under a nearby tree.

The bus – or gua-gua ­ as it is called in Cuba – is notoriously late and always full. At only about 2 cents a ride, it’s a bargain way to travel, but if you believe that time is money, what you save in your wallet, you will almost certainly lose in waiting. The busses zoom around the city, packed to the brim with people, faces and hands pushed up against windows and bursting open doors. The bus system has fixed routes, with the final destination listed on the front of the bus. Nevertheless, finding a map of bus routes is virtually impossible, it is best to ask a local which bus to take. You can probably ask as you stand in line.

If you are itching to ride a bus, but don’t want to brave the moving saunas of the normal bus system, you can try a taxi rutero. In 2014, Havana’s bus system was greatly improved by the introduction of these smaller yellow busses. They have a fare of 5 Cuban pesos – just under a quarter – but the price increase guarantees air conditioning and seating in the bus. Ruteros will stop wherever you wave them down, but only if they have room. So while you might not be standing in a line to get on, you might be standing around a long time before you find one that is available.

3. Maquina in the form of an almendron

If you dread the waiting game, consider taking a máquina, or shared taxi. The majority of shared taxis are 1950s-era American cars, or almendrones. For many visitors to Cuba, a ride in one of these antique cars is an attraction in itself. Nevertheless, for many Cubans, it is part of their daily commute to work. At 20 Cuban pesos a ride – just over 80 cents – a ride in an almendron will take you halfway across the city on any of a number of fixed routes. These cars are in perpetual repair, carefully nursed to drag out their lives. Many are international hybrids, with an American frame, a Russian engine, and a Chinese transmission. More and more, these cars are spruced up and brought to the tourism industry, where you will see them with glossy coats of paint and reupholstered interiors.

To take a maquina, try hailing a worn-down American car. Provided you are on a road where these cabs run, you can stop them at any curb. You will see habaneros standing on the side of the street making seemingly-odd gestures pointing an index finger downward, toward their head, or toward the street, signaling to drivers which route they want to take. If you don’t know the signs, just wave ambiguously, and let the driver know where you are heading once the car stops.

You can find an escape from a surprise tropical downpour by waving down a bicitaxi. As the name suggests, these are small, two-person carts that are motored by a person on a bike. While they are not particularly speedy, bicitaxis are great for short distances when it is dark, raining, or you are weighed down by shopping bags. They tend to roam the cobbled streets of Old Havana. Negotiate the price before you step in; most short distances shouldn’t cost you more than two or three bucks.

We dare you to try all 4 on your next visit!