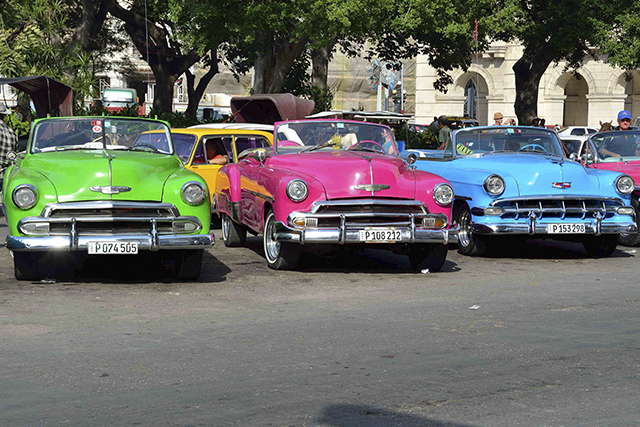 Our Man (and his wife) in Cuba

My wife and I recently had the good fortune to travel to Cuba. This country and its people are spectacular, but what truly struck me is how many American cars from the 40’s and 50’s (and even the 30’s) are still on the road. We all know that these old American cars exist in Cuba, and of course I expected to see them, but I was startled by the fact that they are everywhere! Cuba is a vintage car lover's paradise. 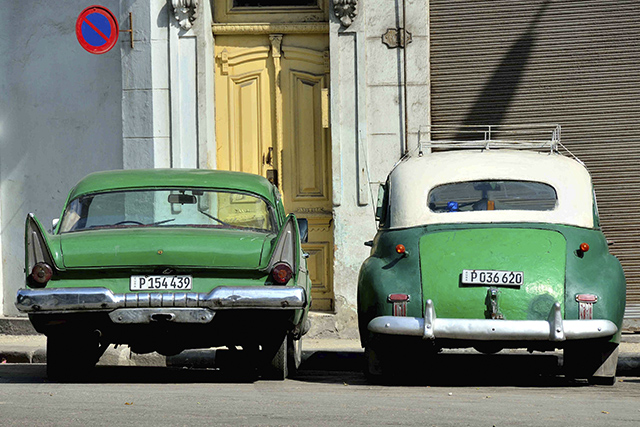 How it All Happened

When the US cut off relations with Cuba in 1961, 150,000 US cars were “stranded” on the island. Almost all of these are still on the road today. Most are privately owned while others are being used as locals or tourist taxis. Prior to the US embargo, Cuba was the world's leading importer of American automobiles. The Cubans call them “Clasicos” (classics) and have a love affair with these beautiful old cars that defies words. Only baseball can rival Clasicos in Cuba. Owners are delighted to pop the hood, let you get behind the wheel, and tell you the history of how they came to own their “ride”. I jokingly asked one delightful man who had a magnificent 55 Chevy convertible, if he had to choose between his wife and his car, which would he choose. After a short pause, he took his cigar from his mouth, looked around cautiously, smiled, and said “Well, I can always get another wife, but not another car like this”. We shared a laugh, but I cannot say for certain if he was serious or joking. 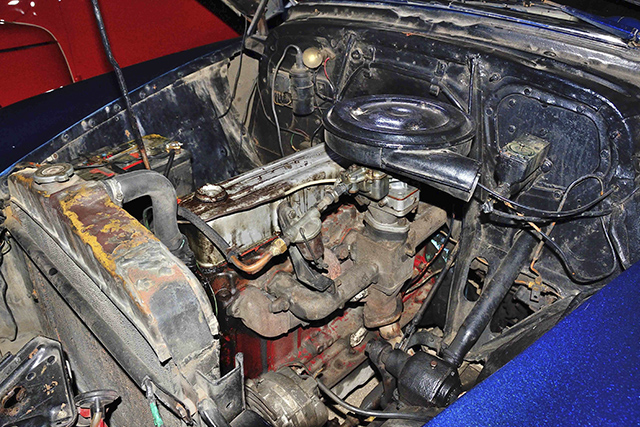 I grew up in the 50’s and vividly remember being driven to school in our neighborhood carpool by big Caddies with massive fins, long fire breathing Chryslers, ultra-wide Oldsmobiles, Pontiacs, Buicks and Studebakers, snazzy Desotos, Hudsons, and the like. The first American “compact” I can remember was a Rambler, and in fact I saw a few in Cuba. It actually weighed less than 3,500 pounds, and got amazing gas mileage in comparison to the rest of the US fleet, which at that time were running in the neighborhood of 8 to 14 MPG, with those massive V8’s nestled under the bonnet.

Those cars were serious works of art. GM, Ford, Chrysler and other auto manufacturers employed professional artists, and these iconic masterpieces were the result of their collective creative process and futuristic vision. They were inspired by the Art Deco machine age that was part of the 30’s, 40’s and 50’s culture, and embodied both form and function in an elegant, artistic, and romantic driving machine. 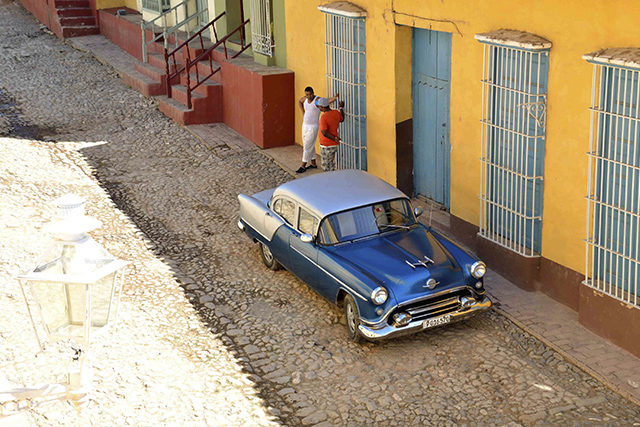 When Necessity Must Be the Mother of Invention

In addition to the 1961 US embargo, when the Soviet Union collapsed in 1991, all available raw materials entering Cuba ceased almost overnight. There was suddenly no availability of steel, aluminum, rubber, paint, plastic, fabric, glass, wire, screws, bolts, or anything else. With U.S. parts having been unavailable for almost 55 years, and since 1991 almost no tools or raw materials having entered the country, keeping these cars running is a complex process.

The Cuban mechanic is a genius and a highly-regarded professional. He is an inventor, innovator, artist, and master of ingenuity, along with being an amazing mechanic. He knows how to fix a leaky radiator using guava and banana pieces. A flattened can will patch a muffler. A discarded coat hanger can be used as wire, carburetor linkage, or a clamp. He salvages parts from no longer in use freight trains, knowing that each part can be repurposed. He is an absolute master of cut and paste. He will never throw anything away. 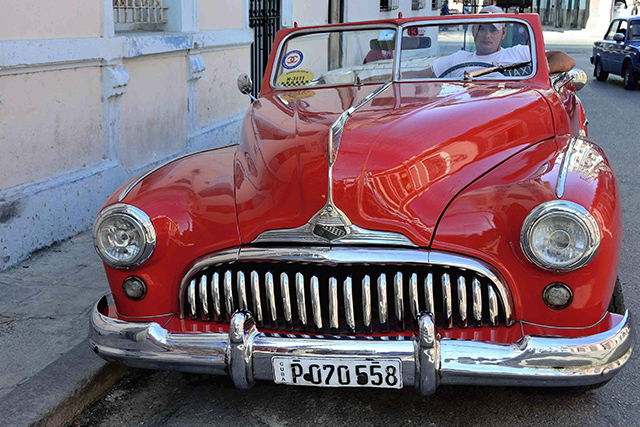 Cubans have found a way to create what is needed from almost nothing! The engine and car itself is often a gumbo of parts from different cars including those made in Russia (the Lada, Moskovitch, Vaz 2105 and the Gaz), and China (the Geely and Bejing 212). Everything is adapted to everything else. A car isn't a disposable like it is to most Americans. It is essential to your life, and you keep it operational as long as possible. A wrench is an extremely valuable item. A factory manual is so respected that a mechanic will thoroughly wash his hands before touching one, and they are always kept away from any work area in a plastic bag, often in a separate room. In Cuba the plastic bag is a valuable item itself. I saw cars converted to run on propane and motorcycles running on old Soviet chain saw engines. Anything that will hold liquid can be the gas tank. Broken windshields are melted into new ones using homemade kilns, forms, and tools, and a secret process.

These "Clasicos" range in condition from almost pristine (used to drive tourists around for an hourly fee), to (like most) privately owned vehicles and local’s taxis, belching smoke and barely held together. Paint can be appliance paint or even house paint. I spoke to an owner who painted his car with a sponge, as paint brushes were unavailable. Forget about a spray paint job – these are only for the “haves”. Nothing is wasted in Cuba. Everything has a reuse value. The streets of this country are sparklingly clean, as paper, metal, wood and plastic are all recycled. Even pop-tops and bottle caps from restaurants are saved and used for other purposes. No one would throw away something as simple few inches of string. The store shelves throughout Cuba are empty, with the exception of a few items imported from Mexico and South America. Absolutely nothing is wasted in Cuba. 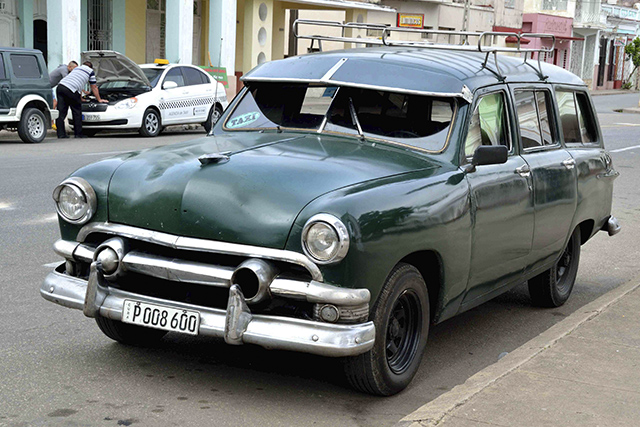 My birthday took place while in Trinidad, Cuba. Upon arrival, parked in front of our hotel was a magnificent shiny Black 1948 “for hire” Ford Mercury roadster convertible in pristine condition, with its driver standing alongside. This was unbelievable as 1948 was in fact the year of my birth! This was One Sweet Ride! It was calling my name and would not stop. We rented this magnificent machine with its driver Michel, and received a guided tour (with the top down), of the colorful colonial town of Trinidad, and the countryside mountains where battles of the revolution took place.

This car was spectacular with twin chrome hood mounted horns, and huge seats that reminded me of our living room sofa. The comfort far exceeded what we have come to accept today. For my money, a modern car is no more than an appliance that takes me where I need to go. I just can’t get excited about them. Just my opinion of course; your mileage may vary (pun not intended). This hour and a half is one of my most enjoyable memories of Cuba, and a birthday I will never forget. 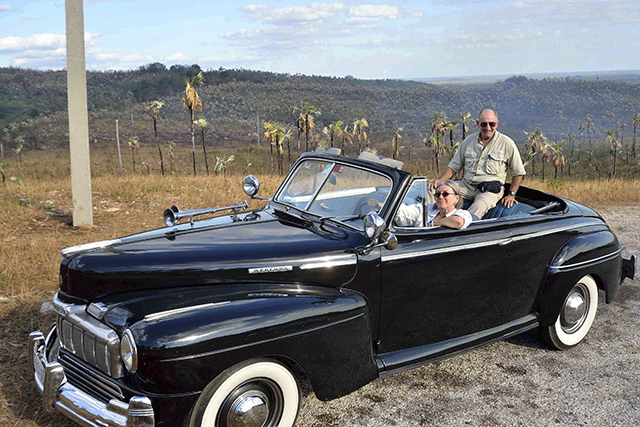 A Short Ride in the Time Machine

On our final day, we stayed at the iconic 5-star Hotel Nacional in Havana. It has hosted the international glitterati of politics, film, art, sports, music, media, and science for over 80 years. Winston Churchill, Jean-Paul Sartre, Ernest Hemingway, Walt Disney, mobster pair Lucky Luciano and Meyer Lansky, Errol Flynn, boxing champions Jack Dempsey and Rocky Marciano, Marlon Brando, Rita Hayworth, Mickey Mantle, John Wayne and Fred Astaire have all stayed here. Even Fidel Castro and Che Guevara have spent nights here. There are 100’s of other recognizable names who have graced the grounds of this beautiful hotel. These days, Steven Spielberg, Kate Moss, and Sean Penn are often guests.

We sat at a table in the outdoor lounge facing the famous Malecon (Havana’s seawall) in the late afternoon Cuban sun, enjoying Cuban Mojitos made with Cuba’s world renowned Havana Club rum. An endless stream of the beautiful old American cars passed by. I set my Nikon’s shutter to 1/2000th of a second and took photo after photo of these fast-moving sleek American Beauties of every condition and color, all on the move in an endless parade. The time machine had been temporarily set 60 clicks counter-clockwise. I drifted back to my childhood when these cars existed in every US neighborhood, and America seemed like a more tranquil place. Perhaps it was the Mojito, the sun, or the magnificent vibrant music that is pervasive in this country. I can’t say for certain but to further investigate, I ordered another Mojito.

A pair of magnificent 57 Chevys followed by an enormous 58 Cadillac with it huge sweeping fins and a brown Packard with the girth of a small whale passed by. A young couple sitting side by side cruised along the sea in a magnificent but very dilapidated hand painted 55 Pontiac convertible, the front of which looked like a tank. Perhaps they were on a date. They were laughing and enjoying their youth like so many of us baby boomers did back in the day. An Edsel passed, being used as a taxi here. They can keep them running in Cuba without parts in 2016 but we could not replicate this feat in the US in 1958! Only after spending time in Cuba can one understand how this is possible. As the second Mojito began to settle in I told my wife that is not unreasonable to assume that Fidel or Che may have once sat at this very table. My wife laughed and agreed, but with a look that made it clear that another Mojito was not in the offing. 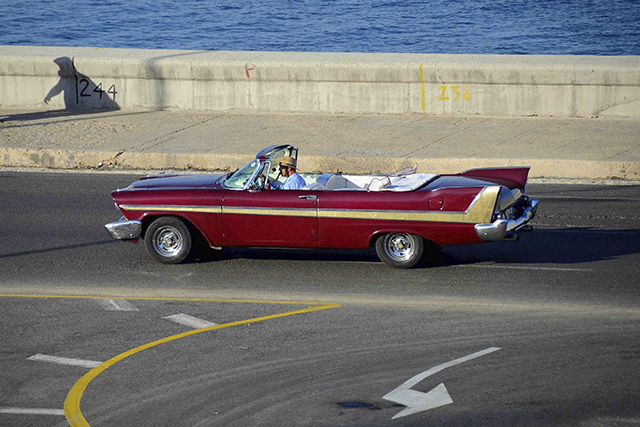 As America moves towards full normalization of relations with Cuba, the fate of these beautiful “Yanks Tanks” remains uncertain. Will they be preserved as a highly-coveted piece of Cuban and American history, or be replaced by today’s plastic and tin driving appliances? It would be heartbreaking to me to think that the beautiful two-tone Dodge that I saw in Cienfuegos would ultimately be crushed and become a screen door or utility shelving; its secrets, life, soul, and history lost forever.

Howard Axelrod is an Ashland, MA resident, travel photographer and writer, and former high technology executive. He has photographed in 79 countries on six continents. He is primarily interested in native and tribal cultures, history, architecture, religion, and wildlife, all of which he feels are all disappearing at an alarming rate. His goal is to document through photography and writing as much of this as possible, while it still exists. He can be reached at highwind@verizon