Home » About Us » Blog » Getting Current On Dual Currency
share 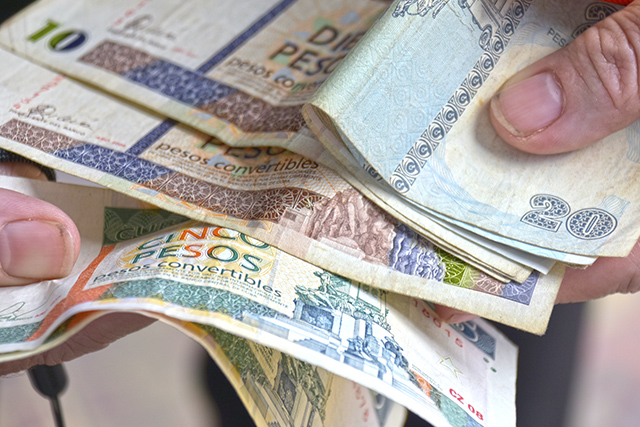 On a small cocoa farm outside of the isolated village of Baracoa, on Cuba’s easternmost tip, I bought a lightly tanned leather wallet. It was designed with a bougainvillea, the tropical flower that abounds on the island. The wallet looked to be quite average to a foreigner, with a pouch for change, a space for an ID card, and even several slots for credit cards, not something that is typically used in the largely cash-based economy. However, there was one detail that might have kept an unknowing tourist puzzled. Inside the bill compartment, a thin strip of plastic divided the space in two. An advertisement in a catalogue might feature it as: “Money storage for a dual economy.” And that is exactly its purpose: the compartment helps the Cuban spender separate their CUCs from their moneda nacional, or Cuban pesos.

It doesn’t take long to realize that doing currency conversions in Cuba isn’t an activity that is limited to foreigners. In fact, changing money is something that many Cubans do on a weekly basis. In Cuba’s capital, you will see “CADECA”s, the national chain of currency exchange centers, in every neighborhood. CADECAs are widespread and come in many forms. While your hotel will certainly have a clean, air-conditioned exchange location with a guard, just a few blocks away the CADECA might be nothing more than a small structure with a window and a line of people waiting their turn along the sidewalk.

Despite having two currencies, the CUC, pronounced “kook” or “C-U-C”, is Cuba’s only internationally recognized currency, and thus tourists must change their currency into CUC. While the CUC’s value is pegged to the US dollar 1:1, those who decide to change US dollars to CUC will be slapped a 10% penalty in addition to the 3% change fee. Thus, you will ultimately receive 87 CUC for every 100 USD you hand over.

If you are feeling adventurous, you might consider changing a couple of your CUCs to some moneda nacional. The moneda nacional is the official local currency and ranges between 23 and 25 moneda nacional for every CUC. In this currency, your dollars will go a long way.

Public sector salaries and products that are intended for local consumption are all priced in moneda nacional. For example, for ten moneda nacional – just under fifty cents – you can buy street pizza (although they are not recommended for those of the faint of heart – or stomach!). You can buy a delicious guava pastry for 3 pesos, or even go to the movies for just 2 moneda nacional -  less than a dime!

While you may choose to pay in moneda nacional to purchase these items, CUCs are accepted universally in any main city and thus it is really the only currency that visitors need. Nevertheless, if you pay for something on the local market in CUC, it is possible you will get your change in Cuban pesos. It might feel strange to hand over a one-CUC bill to buy a street pizza and receive a 10-peso bill in return! But be careful! Sometimes it can be difficult to tell which currency a price is in, and Cubans rarely denominate it explicitly. Feel free to ask for a clarification if you are unsure. It’s better than paying 24 times too much!