Boasting a UNESCO World Heritage Site since 1988, Trinidad is a veritable open-air museum of Spanish colonial architecture, and most likely how your idyll in Cuba looks like. Nowhere else on the island is the Cuban way of life more evident: vibrant colors, storybook architecture and locals socializing on ancient cobblestone streets. But aside from its picture-perfect looks, Trinidad revels in the best of both worlds. Located in the central Sancti Spíritus province, it’s ideally set between the Caribbean Coast with shimmering turquoise visions to Playa Ancón and the lush Escambray Mountains.

The city is small in size, but rich in sights to be seen. Plaza Mayor of Trinidad, its historic center, is where your tour should start. Ridden with thick cobbles and pastel-colored houses with wrought-iron grilles, colonial-era mansions such as the Santísima Trinidad Cathedral, Convento de San Francisco and Palacio Brunei border the iconic square. Dating from the 18th and 19th centuries when wealthy landowners amassed fortune in sugar trade, most of these former residences now house museums of all sorts. 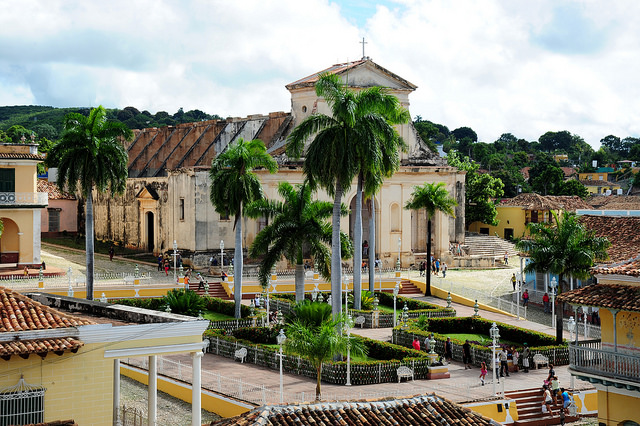 Little preservation was done following the fallout of the sugar and slave trade in nearby Valle de los Ingenios (also known as Valley of the Sugar Mills, a nice side trip some seven miles outside the city), succumbing to stark isolation until the 1950s. Thanks to its World Heritage Site status awarded in 1988, the heyday of yesteryear was restored and preserved until this day.

Thanks to its large number of collections and upkeep of the town’s antiques, Trinidad is one of the best-preserved cities in the Caribbean. Displaying pieces related to the town’s 500 years of history, each museum is an experience of its own. The Museum of Colonial Architecture is one such example. But museums aside, art peeks from every glassless window and each open house. Whether it’s an artist at work or an antique-filled locale, the city is a museum in itself. Grab your camera and get lost, Trinidad bursts with color and life.

And don’t forget the rule of thumb here. As the sun goes down, the music goes up. Head back to Plaza Mayor for live Cuban music and 1 CUC Santiago de Cuba rum shots. Almost every Cuban city has a Casa de la Musica, but the Trinidad one is extra special. Uniquely perched above the plaza, cascading onto the stairs, the every-day live music starting at 7pm and ensuing party never disappoints.

Whatever you do, you can’t go wrong in Trinidad.  The only thing that can go wrong is a much-too-short stay. Be advised.