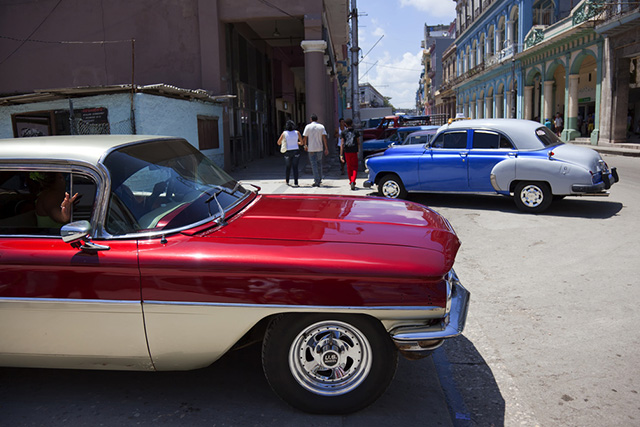 Billed as the first US TV series shot entirely in Cuba, reality show Cuban Chrome aired on the Discovery Channel in the summer of 2015. Produced by Craig Piligian’s Pilgrim Studios, the ground-breaking program was broadcast in English and Spanish in 220 countries—though not in Cuba itself.

The eight-part docu-series focuses on Cuba’s car culture and islanders’ fascination with restoring American vintage autos. It follows the A Lo Cubano Car Club, a driven group of mechanics, apprentices, and enthusiasts committed to repairing and maintaining their classic cars under less-than-favorable conditions. Club members use ingenious and sometimes outlandish restoration methods, employing household items and even a boat engine—demonstrating the island’s culture of tenacity and resilience.

Cuba is home to an estimated 60,000 vintage American cars, particularly Chevys, Fords, and other models dating from the 1950s. The 1959 Cuban Revolution and subsequent US embargo put the brakes on American cars and even auto parts reaching the island. Cuba’s vintage vehicles remain frozen in time—irresistible to visitors, but challenging to repair and maintain.

The Discovery Channel faced a bumpy road while filming. Production stalled for more than two years while the network lobbied the US government for approvals and permissions. The series was authorized and under way before President Obama and Cuban President Raul Castro announced that their countries would restore diplomatic relations. In a stroke of luck, the film crew was in Havana at the time of the historic meeting. One Cuban Chrome episode chronicles the landmark event, showing cast members huddled around a TV screen watching the news with their families.

Although the series hinges on cars, it also takes viewers on a ride through the local culture, offering glimpses into daily reality on the island. Episodes include a cockfighting segment, an explanation of the country’s dual currency system, an overview of the local real estate market, and places never before seen on US television. For many Americans, it offers authentic insight into a culture that remains largely unknown. The show also highlights the importance of family ties in Cuban culture, beautifully shot scenes and landscapes, and an infectious soundtrack, to ratchet up the fun.

Discovery has yet to make an announcement, but a second season may be down the road. If everyday Cuban life intrigues you, or vintage cars make your heart race, park yourself in front of Cuban Chrome.

If you want to see Cuban culture and some of these vintage vehicles in person, we recommend our Undiscovered Cuba Tour, Classic Cuba Tour or our Legendary Cuba Tour.