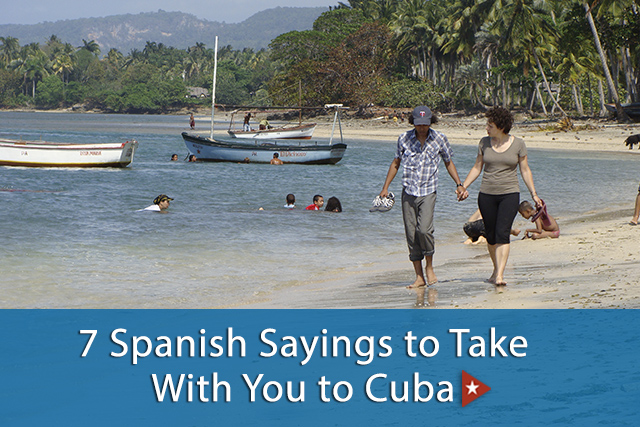 Part of enjoying the Cuban culture is incorporating it into your experience. The easiest way to do that? Through communicating. As with most Spanish-speaking countries, Cuba has their own nuances with the language, complete with colloquialisms and slang that inform as much as they entertain. So study up and get ready to speak up during your next trip. Here are the seven phrases Spanish class didn’t teach you.

Referring to someone as “Acere” is endearing—it’s a term for “buddy” or “friend.” As for the “qué bola” bit, it’ is a pleasantry to ask someone how things are. All together, “Acere, qué bolá!” translates to “What’s up with you?” or “How’s it going?”

Chévere is the universal Cuban term for “cool.” It can be used to describe almost anyone or anything, whether you’re paying someone a compliment about their outfit or talking about a new band that you like.

This is a playful and charming way to say goodbye to a friend. It directly translates to “Goodbye, fish!” but a colloquial English equivalent would be “See you later, alligator!” And just how that saying is a departing call-and-response to which you reply “In awhile, crocodile!” the Cuban “Chao, pescao!” also has a response: “¡Y a la vuelta picadillo!” This translates to “And next time mince meat!” The sayings have roots in the schedule of the old ration cards, which allowed families to have fish for the first 15 days of the month and then meat the rest of the month.

“En talla,” directly translates to “at the size.” The closest English phrase that would be equivalent is “it’s a good fit.” You can use “en talla” when an idea or understanding between to people makes sense or fits figuratively. So when you’re in the know and understanding each other that’s when you use “en talla.”

Cuba is a country full of well-intentioned flirting. And when it comes to cultural banter, why not join in on the fun? The origins of “tremendo mangon” (masculine) and “tremenda manguita” (feminine) dates back to when mangoes were a scarce treat in Cuba—so it became a good fit for describing a desirable person. If you’re feeling bold and want to use the phrase to someone’s face, just say: “Estas hecho un mangon”—which translates to “You are looking really good.”

When it’s time to leave, just say “Me piro.” It’s a casual way of saying “I’m going to get going.” Because sadly, all fun has to come to an end, right?