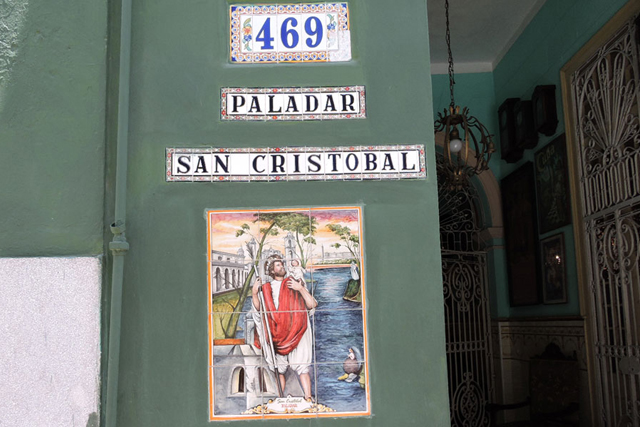 San Cristóbal paladar stimulates all of the senses, from before you step in its front door, to the cafe cubano that helps digest a scrumptious lunch. A trip there from the Capitolio takes you westward along the narrow streets of the Centro Habana neighborhood, full of corner coffee spots, kids on bikes, sellers pushing carts full of avocadoes and guavas, and women standing in doorways fanning themselves. The bright green building inhabits one half of the Spanish colonial-style houses that populate much of Centro Habana, easily distinguished by their spacious, square interior courtyards.

Owner and chef of San Cristóbal, Carlos Cristóbal lives in the building which holds his restaurant. Founded in 2010, the restaurant feels more like an extension of his house than a commercial property. When you enter, you are escorted into one of the many rooms of the restaurant. The largest room, most certainly once a living room, boasts an altar to the patron saint of Cuba, the Caridad de Cobre. Pop images of Cuba’s founding father, Jose Martí, hang on the wall. The tables are mismatched, and the walls display an eclectic mix of trinkets and old, framed photos that celebrate Cuba’s cultural and political history.

Next door, the VIP room is more intimate, with just one round table in the center. The walls are lined with historic relics, each bearing its own story - old pictures of Havana, grandfather clocks that no longer chime, and a giant zebra skin. In recent years, this room has hosted a slew of American celebrities, from Beyoncé and Jay-Z to Mick Jagger. On the Obamas’ visit to the island in March of 2016, the family ate their first dinner in Cuba at San Cristóbal. In recognition of that historic night, Carlos created the “Obama corner” in the VIP room, which flaunts pictures of the president’s visit, and even a painting of Obama waving up to habaneros on balconies right outside the restaurant’s entrance.

A great lunch at San Cristóbal starts with a spare-nothing tapas platter with green olives, wedges of cheese, jamón iberico, yuca chips, and even lox. It also includes the house specialty – eggplant ceviche.

While the appetizer might have you feeling like you are in Spain, by the time the main dishes arrive you will quickly remember you are on the island. For a taste of everything, try the Gran plato del mar (the large sea platter) which offers shrimp kebabs, lobster, and fish with mashed potatoes. If you are feeling adventurous, switch out the potatoes for puré de malanga, or taro puree. For dessert, I recommend going old school; there’s nothing like a rich and milky flan to end a meal.

After your meal, your waiter will stop by to offer you a dash of rum and a cigar help you slowly mull over the fantastic experience you just had. When you ask for the bill, you might be even more delighted; with most mains ranging from 10 to 16 CUC, this gourmet dining experience won’t break the bank!

San Cristóbol Paladar is located at San Rafael No. 469 between Lealtad and Campanario streets. It’s worth making a reservation before you go!

Experience Cuba's many delicious paladares on an insightCuba tour. With six Signature Cuba tours, Cuba Getaways, Cuba Cruises, and private group tours, over 250 departure dates, insightCuba has something for everyone.

Written by: Miriam PsychasMiriam Psychas has a B.A. in History and Literature of Latin America from Harvard University, and spent a semester studying Cuban history, literature, and culture at the University of Havana. She was based in Havana for the fall of 2014 and 2015 directing a study abroad program and in 2016, traveled frequently to the island for her work in US-Cuba relations. She is an avid Cuban salsa dancer, and finds a rueda community wherever she goes!