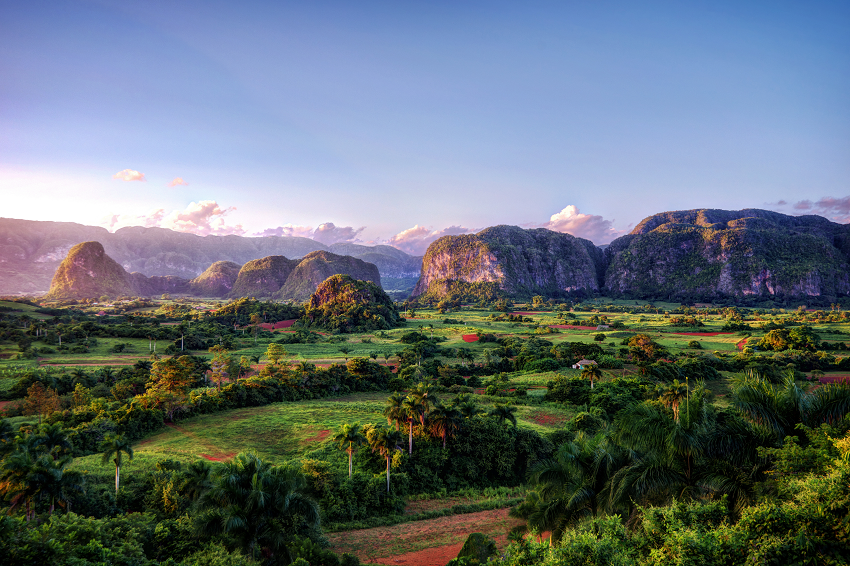 Walk the Cuban equivalent of Yosemite Valley during our visit to Viñales National Park and its landscapes of red soil and rock.

A UNESCO World Heritage Site, Viñales National Park is a mountainous valley woven together with lush landscapes, towering mogotes, and tobacco plants. We’ll meet a local farmer to learn why this red-tainted soil is great for growing, then take a short walk through the park with stops at a drying house and nearby farms used for organic juice and coffee.

Cuba’s quintessential features converge in Viñales, where tobacco fields surround limestone spires and colorful 19th-century colonial homes. Less than three hours from Havana, but a world away, the valley has developed into one of the nation’s top tourism hotspots — while retaining its untamed beauty and unassuming culture.

The town’s identity is planted firmly in agriculture, and chief among them is tobacco, which grows abundantly in the red, nutrient-rich soil. But you’ll also find plentiful patches of bananas, oranges, limes, and pineapples.

The visually striking mogotes of Viñales have long been the region’s biggest attraction. These isolated, steep-sided hills, are products of erosion across the millennia — composed mostly of limestone, which is more resistant to weathering than other forms of rock. Most of these mogotes are found in the Carribean, with Cuba claiming the lion’s share. You’ll spot them across Viñales, as well as east of Havana in the Matanzas province, near Cardenas.