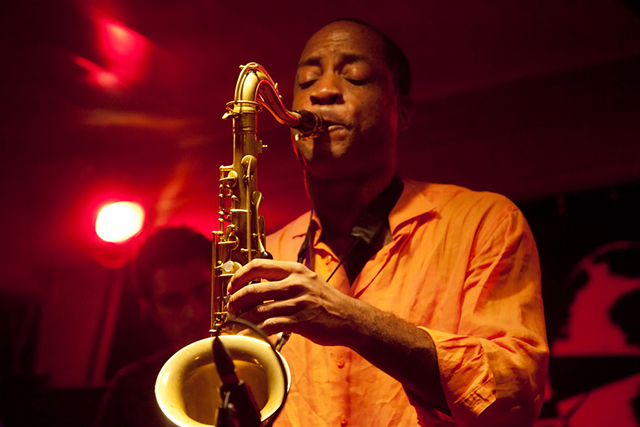 Most Americans have heard of Cuban music legends like salsa star Celia Cruz, classics powerhouse Buena Vista Social Club, and of course, favorite bandleader Desi Arnaz. Cuba’s tradition of producing extraordinary talent carries on today, and many of the island’s contemporary musicians are making waves across the globe. Here are some of their latest chart-topping tunes.

“Subéme la Radio” (Turn Up the Radio) and “Bailando” (Dancing)

You’ve probably heard of Enrique Iglesias, the Spanish star who brought these pop songs and many more to fame across the Americas, but several of Iglesias’s hits were actually masterminded by Cuban musician Descemer Bueno.

Originally from Havana, singer-songwriter Descemer Bueno has an extensive repertoire dating back three decades that spans genres and includes collaborations with some of Spanish-language music’s biggest stars around the world.

“Subéme La Radio”, which means “turn up the radio,” is the latest smash hit from Iglesias and Bueno. The music video for the song was filmed on the streets of Havana, a first for Iglesias. His scenes in the video for the duo’s previous chart-topper, “Bailando,” were actually filmed in the Dominican Republic. Both videos feature stunning images of Cuba, its classic cars, and its abundant dance talent. “Bailando”, which means “dancing”, features Havana’s Lizt Alfonso Dance Company.

You can hear other original songs by Descemer Bueno, offering a much different vibe, here.

Gente de Zona, a band whose name roughly translates as “people from the neighborhood”, have been blending salsa, pop, and traditional Cuban music since 2000, making them a favorite pick for Cubans who love to dance (which is most of them!). Gente de Zona has also made international waves with their appearance in “Bailando” with Enrique Iglesias and Descemer Bueno, as well as their other international collaborations. Gente de Zona’s latest hit is their remake of the 90’s earworm “Macarena.” Beyond the glam and flashback to silly dance moves, the music video also offers a good glimpse inside typical Cuban homes and scenes from everyday Cuban life.

If you want more from Gente de Zona, you should check out “La Gozadera”, which recently exploded as the party favorite across Latin America.

Jacob Forever, Cuban reggaeton star and former front man of Gente De Zona, shook all of Cuba last year with his catchy anthem “Hasta Que Se Seque el Malecón” or, “Until the Malecón Dries”. The Malecón is Havana’s 5-mile long sea wall known for the giant waves that crash over it in the winter and the hordes of Cubans who flock there to escape the heat the rest of the year. Check out the music video for a taste of whacky Cuban youth fashion and great cityscapes.

Nearly a dozen of Cuba’s most renowned musicians from a diverse array of genres, including Descemer Bueno and Gente de Zona, came together to create this epic poetic ode to their homeland. The video features gorgeous images from across the island, from the narrow alleyways of Central Havana to the picturesque Viñales Valley in Cuba’s westernmost province.

The chorus of the song reads:

I return to the cradle that gave birth to me

I return to this neighborhood that saw me run

What I was, what I am and will be, is because of my beautiful island

I have returned to the shelter that calms the pain

And I return to the memory of my first love

What I was, what I am and will be, is because of my beautiful island

If you’re not a big pop fan and instead prefer jazz, you’re in luck. Cuba has a plethora of rising Latin jazz stars.

You may have already heard of Daymé Arocena, the young Afro-Cuban jazzista quickly gaining international renown. The Havana native debuted at the Austin, Texas South by Southwest music festival last year and has been raved about in U.S. media. You can check out her music on her website. Be sure to watch the video of her NPR Tiny Desk Concert.

Other great contemporary jazz musicians you can catch while you are in Cuba (that is, if they aren’t busy touring abroad!) are jazz masters David Faya and Yasek Manzano. True jazz musicians, they are jacks-of-all-trades, but Faya is most known for his piano licks, while Manzano is a Juilliard-trained trumpeter.

InsightCuba’s Jazz in Havana and Putumayo Cuba! Cuba! tours to Cuba allow guests to chat one-on-one and enjoy private concerts with some of Cuba’s best musicians. Registration is also open for the Havana Jazz Festival tour in January.

Whether you’re on a Cuban music tour, or choose one of insightCuba’s other tours to Cuba, you are guaranteed to witness Cuba’s rich musical traditions for yourself. Between melodies floating down the cobblestone streets of Old Havana, troubadours serenading diners, and nightly Buena Vista Social Club shows, it’s hard to miss!

No matter what your taste in music is, your expert InsightCuba guide always has an ear to the ground for the best performances of the week. But be careful, songs like “Until the Malecón Dries” are sure to stick in your head!