Home » About Us » Blog » Enjoy Cuba at Home: Music and all That Jazz
share 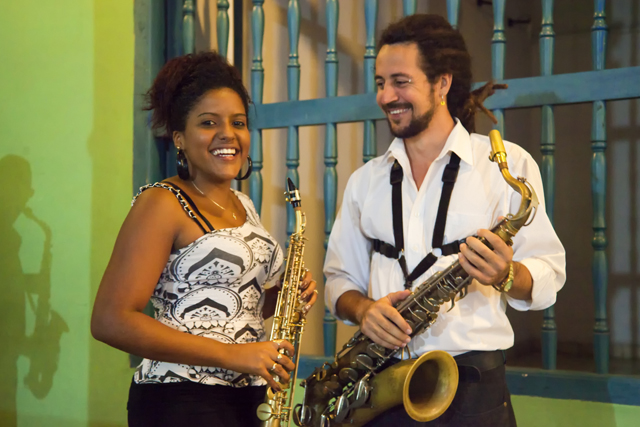 Whether you are preparing for your trip to Cuba or just leaving the charming island, there’s one thing about the country that can transport you there instantly: the music. Cuban music comes from a rich Caribbean culture that fuses Spanish, African and other varied influences of centuries past while incorporating newer genres that include jazz, pop, hip hop rock and soul.

If you’re looking for an authentic Cuban experience at home, there’s no better way to evoke the memories of this passion-filled Caribbean ile than to curate your very own Cuban music set. Though salsa music is one of Cuba’s most well known musical export, you’d be selling yourself short by not exploring all of the different music Cuba has to offer. If you’re game to explore fine Cuban music, we’ve got some suggestions to get you started.

The son is likely one of the most distinct, uniquely Cuban tunes you’ll hear in the country. If you’ve ever been to a Cuban night club, restaurant or live musical performance, you’ve likely heard the sultry sound of the Cuba “son” or son cubano.

There are several variations of the son, but you’ll recognize it by the strong percussive sound, interlaced with Spanish guitar, flute and brass instruments like trumpets or trombones. You’ll know the son by the persistent clave and vocals that employ call and response refrains throughout the romantic melodies.

This Afro-Cuban genre  features mostly percussion instruments, vocals and includes dance as part of the live performance component. The moves are thought to be derived from a mix of Spanish flamenco and tribal African choreography. Live rumba sessions are intense: imitating coquettish interactions between male and female dancers while calling on “Orisha” deities.

Sunday afternoons at the Callejón de Hamel in Havana feature a rumba orchestra and dancers that convene for an impressive show. The performance is lively and vibrant with a neighborhood-party vibe.

After you’ve set the tone with foundational Cuban music like the son and rumba, you’re now prepared to experience many of the sub-genres of Cuban music that include Cubatón (Cuban reggaetón,) hip-hop, EDM, rock, R & B, neo-soul  and others. You can even find versions of Cuban doo-wap from the 60s!

Basically, the contemporary Cuban music scene has gleaned from various international music influences that have produced creative, Cuban-twists on almost any music genre you can think of.

Perhaps the culmination of all that is Cuban and musical exists in the Cuban jazz scene. Not only did this genre devlop out of the African-Spanish musical synergies, but there was considerable collaboration and mutual influence between Cuban jazz musicians and African-American jazz musicians as early as the 1940s.

Cuban jazz made a re-emergence in the1990s with the release of the movie, Buena Vista Social Club, and still persists as a cultural staple that attracts many tourist to Cuba until this very day.

If you think you’d like experience a piece of Cuban culture through music, consider joining the insightCuba’s Jazz in Havana Tour or the Havana Jazz Festival. You’ll experience the best that Cuba has to offer when it comes to both Jazz and the folkloric predecessors that created it. From Havana to Matanzas, you’ll get full insight into traditions and cultural circumstance that have come together to create what we know to be a significant part of Cuban music.


Important Cuba Travel Statement: Cuba remains one of the safest destinations for travel. All insightCuba tours are scheduled to depart as planned and we look forward to sharing everything we love about Cuba.