With help from a private business, Havana’s old neon signs are flickering back. We’ll learn about the process and see works in progress. 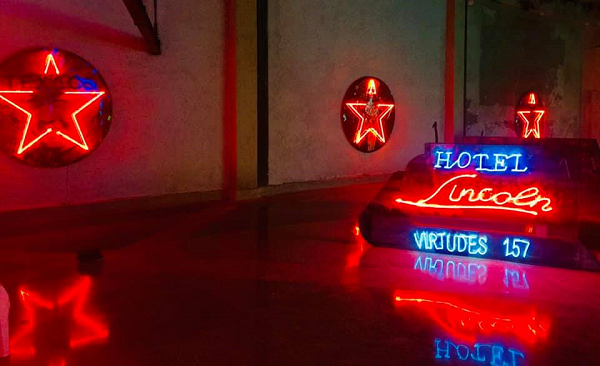 The many lights in Havana’s past once earned it the nickname, “Broadway of the Carribean.” But in the decades since Cuba’s Revolution, those lights have burned out. Now, private enterprise is turning the power back on – reflecting the growing impact US-partnerships and non-state businesses are having on Cuba’s urban development.

Since their debut in 2015, Kadir López Nieves and Angeleno Adolfo Nodal have been hard at work restoring hundreds of neon signs on the hotels, theaters, and cabarets of Havana. The two met in Cuba’s art scene over a decade ago following Nodal’s stint as general manager of Los Angele’s Department of Cultural Affairs, where he restored vintage neon in Hollywood and beyond.

In the 1960s, Havana’s flashy neon signs were both expensive and emblematic of an overly commercialized society. And in the years since, economic hardship and harsh sunlight have destroyed almost all of them. But Nodal sees a bright future in their restoration, telling the Los Angeles Times, “It’s the neon equivalent of planting a tree...It represents peace, a relationship.”

The Havana Light Project is housed in the newly-christened REX Neon Center, formerly the Rex Cinema, Cuba’s first multiplex theater circa 1938. In the decades before Nodal and Nieves moved in, Rex was in a state of disrepair — having been a warehouse for Havana’s garbage collectors. Their restoration of the 7000 sq ft space, along with the adjacent Cine Duplex, was a massive feat in its own right.

We’ll tour the neon signs outside of the REX Neon Center before getting an up-close look at the team’s latest work. Inside, we’ll enjoy a historical house cocktail, the “Havana Special,” and learn about the expensive, labor-intensive process of making and restoring these works of art.