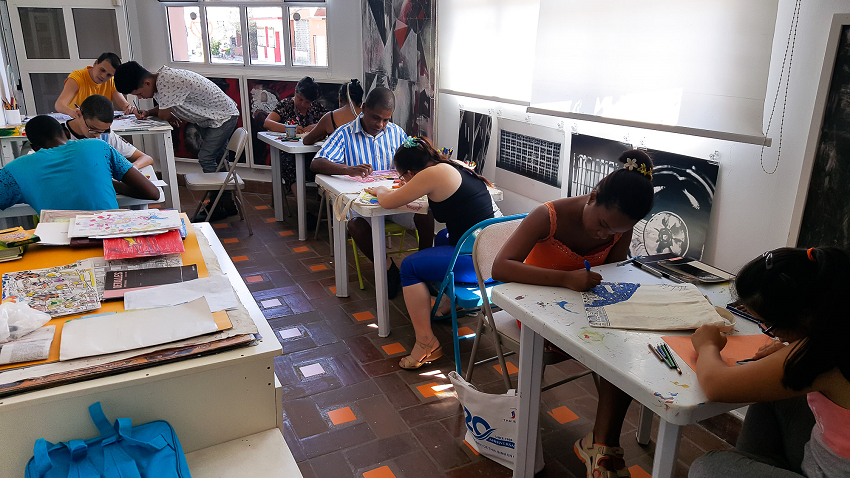 Observe artists in action at this independent workshop for Cubans with mental health disorders.

Cuba’s art scene flourishes in large part due to support and funding from the government. So to help showcase outsider voices, Samuel Riera launched the independent Riera Studio in 2012. Built outside mainstream art institutions, the Riera Studio is a space for artists with no formal training and people on the margins of Cuban society.

Reflecting the mental ailments and vulnerable social status of its artists, the Riera Studio often showcases non-conventional materials and techniques. You’ll have the opportunity to watch these artists in action and to learn more about the studio’s mission.

The colorful, Cuban imagination occupies museums, facades, and courtyard walls in the capital city and beyond. And a hands-on approach from Cuba’s government is one reason why artists, in particular, occupy a special place in the economy. Here, most industries are state-run. Thus, most Cubans work for the government – but artists are an exception, along with over 200 occupations like taxi drivers, electricians, barbers, and soap makers, who work for themselves.

In America, pursuing dance, music, or visual art is rarely a promise of riches. But in Cuba, even modestly-successful artists can far outearn state employees. And with free education through college, including art school, working and living as an artist is more feasible here than anywhere. But there’s a catch: artists – like all self-employed Cubans – need a license. And some people, inevitably, are shut out of the system.

Samuel Riera graduated from the Academy of Fine Arts in San Alejandro – making him an official, licensed artist. And after gaining international success, he began looking outside of Cuba’s established institutions. There, Riera discovered an underserved population: Cubans with mental illness, such as schizophrenia, autism, Down’s syndrome, and those on the margins – homeless people, former prisoners, and the misfortunate.

By turning his private home into a studio, Riera skirted some of the State’s requirements for licensing, while giving these unofficial artists a place to create and sell their work. Their creations fall under two similar, but different categories: art brut and outsider art. Art brut came first – coined by a French artist in the early 1900s, it literally means “raw art” and ties closely to mental illness or impairment. Outsider art is a broader term, which includes anyone outside of mainstream art education.

If that all seems a little complicated, don’t worry. You’ll get a clearer picture during our visit to this extraordinary studio.

This experience is available on our Weekend In Havana Tour or can be integrated into a custom-made itinerary.