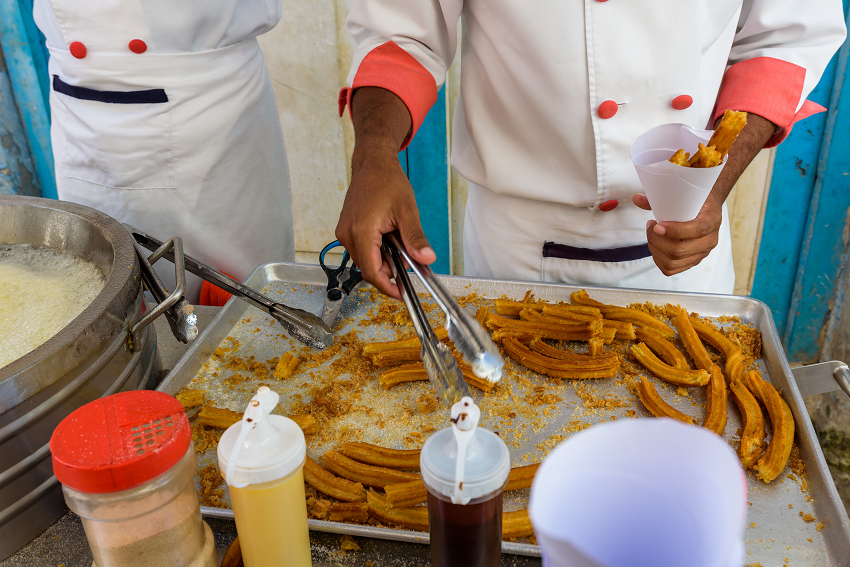 Cuban cuisine goes far beyond their famous sandwich. Join us for a neighborhood tour of the city’s best street food. 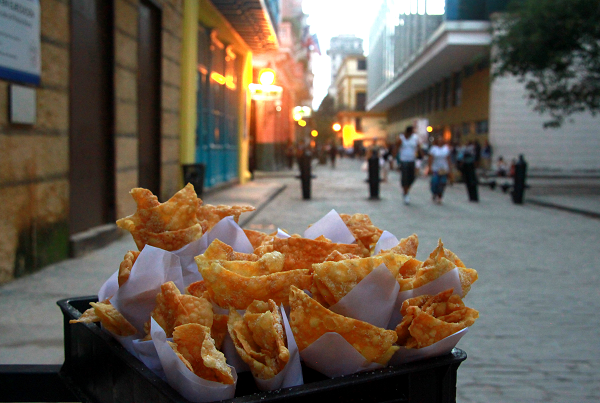 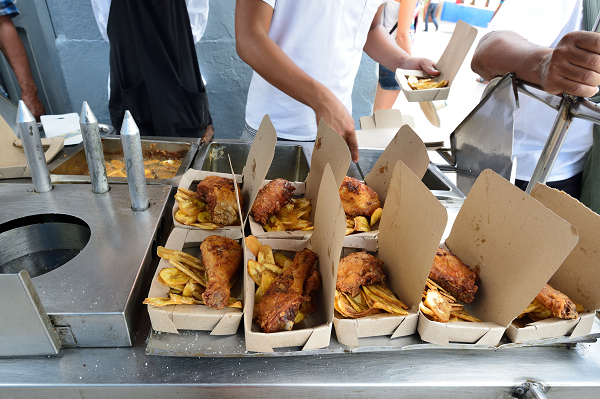 Street food is an essential part of Cuban life. Join us for a walk through the Havana neighborhood of Vedado as we visit our favorite street food spots. You can expect traditional entrees like the cajita – a boxed snack of rice, beans, and pork with tomato and cabbage. Along with Cuban pizza, which is usually made with gouda – instead of only mozzarella.

Cuban dessert includes croquetas – small balls of fried food – and plenty of pastries, pies, and juices made from local guava, coconuts, and sugarcane. Of course, no food tour would be complete without a stop at the Copelia Ice Cream Emporium for helado ensalada (ice cream salad), six scoops of ice cream served in one bowl.

This activity is available on our Classic Cuba tour or can be integrated into a custom-made itinerary.

Cuban street food brings cheap, delicious – often fried – meals served ready to order. In Havana and beyond, use these travel tips on Cuba's foody-friendly streets. Cuban cuisine is a blend of international inspirations from Spain, Africa, China, and the Caribbean. In Havana and beyond, look for these affordable, delicious, and authentic dishes and drinks that represent the best of Cuban street food.

Cubans and Americans agree that café comes before anything else. And visitors to the island will find this favorite beverage on almost every street corner. Traditional café Cubano comes in the form of a dark roast espresso shot, mixed with a hefty amount of sugar, and whipped vigorously. And if you're used to American coffee or Italian espresso, you'll find the Cuban counterpart to be more sugary and strong. Or as Gloria Estefan put it, "Cuban coffee is very powerful, very sweet, and a little dangerous – just like the people who drink it."

A sandwich de huevo is a simple, speedy answer to morning hunger. It consists of a fresh, fried egg between two pieces of Cuban bread, a white bread similar in consistency to French baguettes. You can usually grab two or three for a dime apiece. And for some extra flavor, add ham or cheese

Pineapple on pizza may be controversial in America, but Cubans are all in on pizza Hawaiana. This cheap, charming any-time-of-day food is traditionally smaller, folded in half and eaten without utensils on a paper plate. You'll find the tomato sauce sweeter, thicker and less spicy than its Italian counterpart. And you’ll taste gouda cheese alongside the traditional mozzarella. Pineapple, however, may be the least surprising flavor of pizza Cubano with bananas, plantains, and raisins not uncommon topping options.

Perhaps the most expected street food in Cuba is the sandwich bearing the country's name. Sometimes called a mixto, you'll inevitably have two or three (or four) of these on your trip to the island. The traditional mixto consists of pork, ham, swiss cheese, dill pickles, and yellow mustard on Cuban bread. But if you're looking for something other than ham between bread, don't worry. Cubans love their sandwiches, and you'll have plenty of choices.

Rice, beans, and pork are the proverbial meat and potatoes of Cuban cuisine. And you'll typically find all three in a cajita, a thin cardboard box filled to the brim and topped with a bit of cucumber or tomato salad. But what the cajita lacks in sturdiness, it makes up for in calories and convenience. Translating to, "small box" – this lunchtime favorite is a typical street food across the country, beloved for being inexpensive, tasty, and filling.

Among the most addictive street foods, batidos are a blend of fruit, sugar, ice, and milk. It's similar to any shake you'd find stateside – except for fruit, which is typically papaya or guava. The faster you drink, the better it is, so drink quick!

Pie de coco is a small coconut pie often served as a Cuban dessert. Like papaya and guava, coconut is a staple in the country’s dishes. So look for cake, flan, meringues, tartlets, and small pastries known as pastelitos. They're all frequently topped or filled with some form of coconut.

Plantains are another staple of the Cuban diet. And when flattened, thinly-sliced, and deep-fried they're called tostones or maduros. The Cuban equivalent of potato chips, tostones are salty, crispy and often served as a side dish. But between the plantains, keep your eyes open for other deep-fried delicacies like churros, malanga fritters, and yucca fingers.

The Cuban people are ingenious in their culinary creations. And any list of Cuban street foods is bound to miss more than a few dishes. The best way to taste all the above – and more – is on a tour of the island. Explore insightCuba’s different tours and get in touch with a travel expert today on joining their next visit.